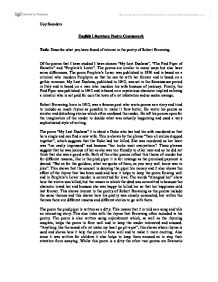 Describe what you have found of interest in the poetry of Robert Browning. Of the poems that I have studied I have chosen My Last Duchess, The Pied Piper of Hamelin and Porphrias Lover. The poems are similar in many ways but al

English Literature Poetry Coursework Task: Describe what you have found of interest in the poetry of Robert Browning. Of the poems that I have studied I have chosen "My Last Duchess", "The Pied Piper of Hamelin" and "Porphria's Lover". The poems are similar in many ways but also have some differences. The poem Porphria's Lover was published in 1836 and is based on a criminal who murders Porphyria so that he can be with her forever and is based on a gothic romance. My Last Duchess, published in 1842, was set in the Renaissance period in Italy and is based on a man who murders his wife because of jealousy. Finally, the Pied Piper was published in 1842 and is based on a mysterious character implied as being a minstrel who is not paid for cure the town of a rat infestation and so seeks revenge. Robert Browning, born in 1812, was a famous poet who wrote poems as a story and tried to include as much rhyme as possible to make it flow better. He wrote his poems as sinister and disturbing stories which often confused the reader. He left his poems open for the imagination of the reader to decide what was actually happening and used a very sophisticated style of writing. The poem "My Last Duchess" it is about a Duke who has had his wife murdered so that he is single and can find a new wife. ...read more.

This illustrates Browning's beliefs well and shows that the language in each of the three poems is very similar and shows this interest of Robert Browning's work as there is a clear link between his mind and his work. The pied Piper is written for the audience of children, but mainly one child called w***y. "So, w***y, let me and you be wipers". This shows that it is written for a child and so the poem was written for children, it was written for w***y and then given to him to draw pictures for it as he was a sick child and there was nothing else to do to entertain him so Browning wrote it for him. This is also why it is not as gruesome as some of his other work as otherwise it could scare the chosen audience of the poem. Rhyme was also used as it amuses and entertains children and so the poems target audience enjoys the poem. This contrasts the other two poems as these were written for adults. This is shown by the gruesome and sinister actions that take place in the poems such as the phrase "and all her hair in one long yellow string I wound three times her little throat around and strangled her". This shows the sinister side of the poem and relates back to Browning's interest in criminal minds. This also shows why it would not really be suitable for children. ...read more.

"My Last Duchess" suggests that the Duke has been with other women and since he is not with them now, it implies that he had had them killed to make way for a new wife, simply because he could not be bothered with the effort of divorce. This shows a large interest in the work of Robert Browning because, although all of the poems include the same theme, they are written for different purposes and contrast in these ways. Out of the three poems studied I preferred the Pied Piper mainly because of the rhyme used in the poem to tell a story and the way in which it is not to gruesome unlike the other two poems. I also enjoyed this poem the most because it was very simple and easy to understand, yet it was very interesting and kept me amused. I did not like My Last Duchess very much because of the way the narrator is very posh and arrogant. The phrase "My gift of a nine hundred year old name", suggests that he thought himself to be very posh and of the upper class and so therefore he should be treat with the utmost respect, whereas his duchess does not love him because of his standing in society but for his personality, and so he disposes of her which I believe was wrong and so I did not particularly enjoy this poem. ?? ?? ?? ?? Guy Saunders ...read more.