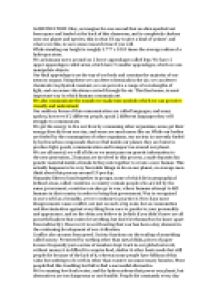 Describing Human Life to an Alien

﻿ALIEN INVATION! Okay, so imagine for one second that an alien sparked out from space and landed at the back of this classroom, and is completely clueless onto our planet and species, this is what I?d say to give a kind of ?primer? and what were like, to save some research time if you will. While standing our height is roughly 3.777 x 1010 times the average radius of a hydrogen atom. We as humans move around on 2 lower appendages called legs. We have 2 upper appendages called arms, which have 5 smaller appendages, which we use manipulate objects. Our final appendage is on the top of out body and contains the majority of our sensory organs. ...read more.

We are all mortal, we will all die so we must pass our genetic information to the next generation, 2 humans are involved in this process, a male deposits his genetic material inside a female & they mix together to create a new human. This actually happens to be very favorable things to do on our planet, on average men think about this process around 19 per day. Humanity likes to bond together in groups, some of which lie in geographical defined areas, called countries. A country contain people who are led by the same government, countries can also go to war, where humans attempt to kill humans in that country in order to bring that government. War is recognized in our world as a brutality, yet we continue to practice it. ...read more.

basic needs but still people die because of the lack of it, whereas some people have billions of this value but nothing to do with it, other than waste it on unnecessary luxuries. Most people find this troubling but fail to find a successful alternative. We?re running low fresh water, and the hydrocarbons that power our planet, but alternatives are too dangerous or not feasible. People die constantly every day and we are now completely reliant on technology. Now believe it or not, I did not write this speech with the sole intension of an alien invasion, I?m actually trying to highlight how advanced human beings are, yet how as an entire unit of a population we?ve managed to waste talent, have unnecessary conflicts & struggle with simple survival. Thank-you for listening. ...read more.