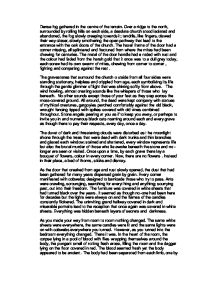 Descriptive Writing. Over a ridge to the north, surrounded by rolling hills on each side, a desolate church stood isolated and abandoned, the fog slowly creeping towards it;

Dense fog gathered in the centre of the terrain. Over a ridge to the north, surrounded by rolling hills on each side, a desolate church stood isolated and abandoned, the fog slowly creeping towards it; tendrils, like fingers, clawed their way closer, slowly smothering the open pathway that lead to the entrance with the oak doors of the church. The hazel frame of the door had a corner missing, all splintered and fractured from where the mites had been chewing for centuries. The metal of the door handle had eroded with rust and the colour had faded from the harsh gold that it once was to a dull grey today, each screw had its own swarm of mites, chewing from corner to corner, fighting and competing against the rest. ...read more.

The duvet of dark and threatening clouds were disturbed as the moonlight shone through the trees that were dead with dark trunks and thin branches and glazed each window; stained and shattered, every window represents life but also the brutal murder of those who lie awake beneath the stone and no-longer are seen or visited. Once upon a time, by each grave there lay a bouquet of flowers, colour in every corner. Now, there are no flowers. Instead in their place, a bed of thorns, sticks and dismay. As the door that creaked from age and rust slowly opened, the dust that had been gathered for many years dispersed grain by grain. Every corner manifested with cobwebs; designed to barricade those who try to pass. ...read more.

The blood seemed fresh yet the body appeared to be ancient. The body had been separated from each limb, one by one they had all been removed and put perfectly around the remains of the dead body. The face had been deformed; no-one would be able to tell who it was or what it did and why. Each lantern was lit and faced the body as though worshiping it, like they crucified the body and ever since have been by its side. But then the noises started. The screaming and the shouting, the muffled footsteps behind you, awakening the bodies beneath and the floorboards that creaked violently every so often. Each floorboard of soft pine had drips of blood that oozed fresh red blood but within seconds the red turned to black and then more red trickled through the gaps of the floor. Suddenly, ...read more.

****
This essay shows a sophisticated and wide vocabulary and that the writer has the ability to create an atmosphere of horror and foreboding. There is some effective use of repetition and some of the images created are very powerful.
The ending is a 'cliff hanger' and leaves the reader wanting to know more but after such a build up this is not totally successful.