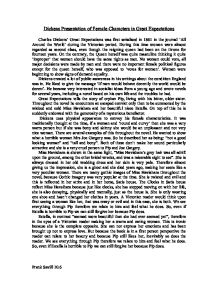 Dickens Presentation of Female Characters in Great Expectations Charles Dickens' Great Expectations was first serialised in 1861 in the journal 'All Around the World' during the Victorian period. During this time women were almost regarded as second class, even though the reigning queen had been on the throne for fourteen years. On the contrary, the Queen herself was quite masculine thinking it quite 'improper' that women should have the same rights as men. No women could vote, all major decisions were made by men and there were no important female political figures except for the queen herself, who was opposed to 'votes for women'. Women were beginning to show signs of demand equality. Dickens created a lot of public awareness in his writings about the condition England was in. He liked to give the message 'If men would behave decently the world would be decent'. He became very interested in socialist ideas from a young age and wrote novels for several years, including a novel based on his own life and the troubles he had. Great Expectations tells the story of orphan Pip, living with his bitter, older sister. Throughout the novel he encounters an escaped convict only then to be summoned by the wicked and cold Miss Havisham and her beautiful niece Estella. On top of this he is suddenly endowed with the generosity of a mysterious benefactor. ...read more.

Again because she is pretty and the fact that, it is not her fault that she is this way, she is forgiven by the reader and Pip, because he is in love with her. In Mrs Joe Gargery's opinion she has spent too many years raising Pip. She spends all her time being spiteful to Pip and will not be kinder, whatever the scenario. Pip would often recall scenes such as this one, 'My sister made at dive at me and fished me up by the hair'. She strongly resented him and would take every opportunity possible to show it. She treats her husband Joe in the same way, although at heart Joe is an honest man and good man, he isn't very bright and Pip always thinks of him as a 'larger species of child'. Mrs Joe Gargery will, on the other hand, treat him like one Dickens makes the reader like Joe because Pip is very fond of him. This only increases the reader's dislike for Mrs Joe Gargery. It is only until her encounter with Orlick that she becomes a completely different person, becoming much more patient. It is only because of an event such as this, she is like this, not because of her own will. It's the male character Orlick who changed Mrs Joe Gargery into some more acceptable to the reader. ...read more.

After she is burned her psyche is left in such a terrible state, that her mind is beyond recovery. Dickens uses physical appearance in his books to translate what the characters personality is like. He also enforces that fact that all the things that happen to the women in his novel, happen because men have willed it. These women are what they are because men have authority of the women and there is nothing they can do about it. The Victorian reader appreciated this because men were still the authority at this point in time and equal rights weren't around. Another issue would be the fact that Dickens was never considered a socialist because he always criticised England in his books but he never said what should be done in place of its faults. This is possibly why his books were so popular. The modern day reader may take other approaches. Dickens left the book with a happy ending but today's reader may still be happy with the story had it not been happy. During the Victorian period, it was necessary to create reader resolution, without this, Great Expectations may not have been so successful. The modern reader, might feel that Dickens was very harsh, punishing these women for their 'moral crimes'. The best thing for the women would be to educate them and right what they are doing wrong. Not to simply punish but to teach, this is the most important gift anyone can receive. Frank Savill 10.6 ...read more.