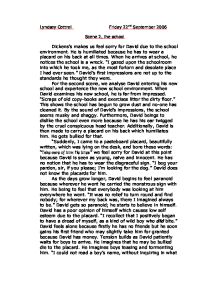 Dickens's makes us feel sorry for David due to the school environment. He is humiliated

Lyndsey Cottrell Friday 22nd September 2006 Scene 2, the school Dickens's makes us feel sorry for David due to the school environment. He is humiliated because he has to wear a placard on his back at all times. When he arrives at school, he notices the school is a wreck. "I gazed upon the schoolroom into which he took me, as the most forlorn and desolate place I had ever seen." David's first impressions are not up to the standards he thought they were. For the second scene, we analyse David entering his new school and experience the new school environment. When David examines his new school, he is far from impressed. "Scraps of old copy-books and exercises litter the dirty floor." ...read more.

David does not know the placards for him. As the days grow longer, David begins to feel paranoid because wherever he went he carried the monstrous sign with him. He being to feel that everybody was looking at him everywhere he went. "It was no relief to turn round and find nobody; for wherever my back was, there I imagined always to be." David gets so paranoid; he starts to believe in himself. David has a poor opinion of himself which causes low self esteem due to the placard. "I recollect that I positively began to have a dread of myself, as a kind of wild boy who did bite." David feels alone because firstly he has no friends but he soon gains his first friend who may slightly take him for granted because David has money. ...read more.

This symbolises David being trapped. Dickens's presents the characters unpleasantly, for example; Mr.Creakle is seen as strict, cruel and gullible. E.g. "do you know me? Hey?" and suddenly pinches David's earlobes as "ferocious playfulness" The more cruel Mr.Creakle is to David, the more the reader feels sorry for David. Mr.Mell on the other hand is seen as the opposite although he is repetitive; he seems to want to know David. "I am sorry to make such a beginning with you but I must do it." This shows Mr.Mell follows orders. Finally, J.Steerforth is the first to make David feel comfortable at the school. However, Dickens's manipulates the reader by presenting Steerforth as taking advantage of David. "You had better give your money to me to take of, at least, you can if you like." Then Steerforth persuades David to buy current wine and biscuits. Steerforth can be seen as deceitful. ...read more.