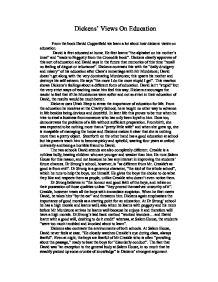 Dickens' Views On Education From the book David Copperfield we learn a lot about how dickens views on education. David is first educated at home. He first learns "the alphabet on his mother's knee" and "reads to Peggotty from the Crocodile book". Dickens clearly approves of this sort of education and David says in the future that memories of this time "recall no feeling of disgust or reluctance". Dickens contrasts this with the "daily drudgery and misery" of his education after Clara's remarriage with Mr Murdstone; David doesn't get along with the very dominating Murdstones; this upsets his mother and destroys his self-esteem. He says "the more I do the more stupid I get". This reaction shows Dickens's feelings about a different form of education. David isn't "stupid" but the very strict ways of teaching make him feel this way. ...read more.

The two schools David attends are also completely different. Creakle is a ruthless bully, beating children who are younger and weaker than him. He runs Salem House for this reason, and not because he has any interest in improving the students' future chances. Dr Strong's school, however, is "as different from Mr. Creakle's as good is from evil". Dr Strong is a generous character, "the idol of the whole school", which he runs to help the boys, not himself. He gives the boys the choice to do what they like and respects them as people, unlike Creakle who doesn't even notice them. Dr Strong believes in "the honour and good faith of the boys, and relies on their possession of those qualities unless "they proved themselves unworthy of it". Creakle, however treats all the boys with immediate suspicion. ...read more.

The fact that David was "an exception to the general body at Salem House, in so much that he steadily picked up some crumbs of knowledge" is Dickens' strongest argument against this type of school. It shows just how little he learnt at his time there, just learning crumbs of education. At Dr Strong's, however, David is completely comfortable; he describes the pleasant surroundings and the Doctor's habits and how easy it is to learn there. Dickens held firm beliefs about important elements of a good education. He personally attended a strict school run by "the most ignorant... worst tempered man" and from his experiences concluded that "there is not likely to be much learnt... in a school carried on by sheer cruelty". Dickens recognises the importance of a less strict, easier education where the student is free to do what he wants and is encouraged to build a firm moral base for the rest of his life. By James Greatorex ...read more.