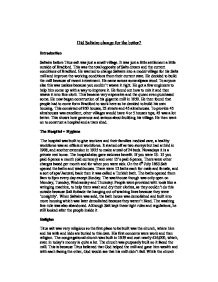 Did Saltaire change for the better?

Did Saltaire change for the better? Introduction Saltaire before Titus salt was just a small village. It was just a little settlement a little outside of Bradford. This was the total opposite of Salts dream and the current conditions of Bradford. He wanted to change Saltaire into a model village for his Salts mill and improve the working conditions from their current state. He decided to build the mill because of recent investment. He came across some alpaca wool. To anyone else this was useless because you couldn't weave it right. He got a few engineers to help him come up with a way to improve it. He found out how to mix it and then weave it into fine cloth. This became very expensive and the queen even purchased some. He now began construction of his gigantic mill in 1850. He then found that people had to come form Bradford to work here so he decided to build his own housing. This consisted of 850 houses, 22 streets and 45 almshouses. To provide 45 almshouses was excellent, other villages would have 4 or 5 houses tops, 45 was a lot better. This shows how generous and serious about building his village. ...read more.

And there is still the old canal, which could be used to get to places it stretches across. Facilities- Facilities have changed in Saltaire, there is now a college, which used to be the old canteen, and the tram shed, which is now a children's play area. The trams were no longer used because of cars so it was converted into the play area, now called jimmy G's. Another thing, which has changed are the rules of the village. In Titus Salts time, he decided the rules, and he made sure people obeyed them. Today, his rules have been abandoned and everyone had to obey the rules set by the government. Whether this is good or not is a matter of opinion I think that it would be better with each village having its own rules, because they then could be suited to the people who lived there. These things are all changes that are for the better of Saltaire, in my opinion. What has Changed For The Worse? All of the things above are benefits of change, these are some of the disadvantages. The condition of Salts mill and its surrounding buildings has declined over the last 100 years. ...read more.

More young professionals live in Saltaire because of its transport links and its location near Bradford and leeds. In 1971 Saltaire was declared a conservation area, to protect Salts Work. Since 1853 Saltaire has developed from a small village to a mill town (in Titus Salts time) to a small modern village, outside of Bradford. I think that Saltaire has changed for the better. It has improved its condition due to the changing technology, if the same technology had been around, Titus Salts village would be the most cleanest. He used the most modern methods for keeping his village clean and looking after the people, he did good but was also in it for his won benefit. Today it is used as a population of business men and computer technology. Saltaire has stayed the same but has been modified due to new technology and improvements. Many buildings have been converted for other uses, but have still been kept in the same condition as before. I think the best way to show this change is witht eh actual mill itself. Its changed from wool and cotton industry to new age computers, just like the rest of the village, so I think saltaire has changed for the better but had technology not have advanced, saltaire would have remained the same and still be the revolution that it was back in Titus Salts Age. ...read more.