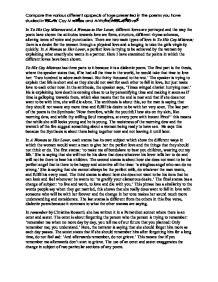 In To His Coy Mistress and A Woman to Her Lover, different loves are portrayed and the way the poets have shown the attitudes towards love are form, structure, different rhyme schemes, altering tones of voice and punctuation. There are two main types of love in To His Coy Mistress; there is a desire for the women through a physical love and a longing to take the girls virginity quickly. In A Woman to Her Lover, a perfect love is trying to be achieved by the woman by explaining what exactly she wants in a partner. Here I have examined the points in which the different loves have been shown. To His Coy Mistress has three parts to it because it is a dialectic poem. The first part is the thesis, where the speaker states that, if he had all the time in the world, he would take that time to love her: 'Two hundred to adore each breast. But thirty thousand to the rest.' The speaker is trying to explain that life is short and so they should not wait for each other to fall in love, but just make love to each other now. In the antithesis, the speaker says, 'Times winged chariot hurrying near.' He is explaining how death is coming close to us by personifying time and making it seem as if time is galloping towards them, which also means that the end is near and that if she does not want to be with him, she will die alone. ...read more.

In To His Coy Mistress, the punctuation highlights the way the person is speaking subtly. In the first part, the thesis, the lack of caesura after each sentence shows that he is speaking with confidence and with a temperate flow, when he says, 'Thou by the Indian Ganges side should'st rubies find.' The enjambment shows that he is speaking freely, which suggests he is trying to woo the woman. However, the lack of caesura in A Woman to Her Lover is to show that she is angry: 'in drudgery and silence no servant will I be.' The enjambment here shows her anger because she is saying that she will not be any man's servant or will not drudge for anyone. In the second stanza, her tone is worse and louder, when she says, 'go! - I am no doll to dress and sit for feeble worship.' The use of an exclamation mark makes her sound louder and much angrier. In To His Coy Mistress, towards the end, he begins to talk about death and how its coming close, his seriousness is shown by a few more pauses in the sentences, 'Rather at once our Time devour, than languish in his slow-chapt pow'r.' The comma in between 'devour' and 'than', makes the reader pause and briefly think about what he is saying. In the fourth stanza of A Woman to Her Lover, the poet makes a change of subject as the topic of this stanza is completely different to the previous ones: 'I shall be your comrade, friend, and mate, to live and work, to love and die with you.' ...read more.

In the second stanza, her tone is worse and is louder when she says, 'go! - I am no doll to dress and sit for feeble worship.' The use of an exclamation mark raises her voice which makes her sound much more irritated. The last stanza is much more understanding and calm, this is shown by the increase in caesura: 'That I shall be your comrade, friend and mate,' the calmness is portrayed by the pauses that the reader must follow, the woman is asking if a man could just be her companion and not be the stereotypical husband or lover. To conclude, the different loves shown in the two poems are very different, because in To His Coy Mistress the type of love, being expressed is a perfect love but the woman is also explaining the stereotypical views of a husband and wife relationship. Whereas in To His Coy Mistress, the man shows a desperate and raw physical love and try's to get the woman to be with him. In both poems the types of love have been portrayed using different poetic techniques, in To His Coy Mistress the free verse, thesis, synthesis and antithesis help layout the different subjects that the poem views. In A Woman to Her Lover, the last verse having a change of topic shows that the woman can also have a different side to her and can represent what she would want in a relationship. ?? ?? ?? ?? Compare the various different apspects of love presented in the poems you have studied in To His Coy Mistress and A Woman to Her Lover ...read more.