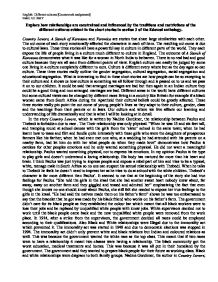 Explore how relationships are constrained and influenced by the traditions and restrictions of the different cultures evident in the short stories in section 3 of the Edexcel anthology. Country Lovers, A Stench of Kerosene and Veronica are stories that share large similarities with each other. The out come of each story emotionally affected the characters in each of them. The resulting out come is due to cultural laws. These three stories all have a powerful say in culture in different parts of the world. They each expose the life of people living in a culture much different to culture in England. The outcome of A Stench of Kerosene demonstrates what it was like for a woman in North India to be barren. There is no real bad and good culture because they are all seen from different points of view. English culture can easily be judged by some one living in a culture completely different to ours. Culture is different every where but as the day ages so can culture. These three stories really outline the gender segregation, cultural segregation, racial segregation and educational segregation. What is interesting to find in these short stories are how people can be so excepting to their culture and it shows us how culture is something we all follow through and is passed on to us and we pass it on to our children. It could be said that arranged marriages are bad but then again in an Indian culture they could be a good thing and non-arranged marriages are bad. Different areas in the world have different cultures but some cultural views can be changed by different races living in a country like Britain for example if a black woman came from South Africa during the Apartheid their cultural beliefs could be greatly affected. These three stories really pin point the out come of young people's lives as they adapt to their culture, gender, class and the teachings from their parents or in laws. ...read more.

I believe that the story is set in Nigeria in Africa. This is because the name Okeke is a Nigerian name and also Veronica mentions standard six which is like a qualification used in Africa. On top of that it's a male dominated society and so is Nigeria. I think the reason why it's not mentioned is because Adewale Maja-Pearce, which is a Nigerian name, wants the readers to research more on Nigerian culture so they could understand the story more clearly and get a more insightful view on it. In Country Lovers the relationship between Paulus and Thebedi has really affected their relationship as they realised it was wrong for black and white people to have a relationship during the apartheid. They knew having sexual relations was wrong but they couldn't control their sexual needs. "He did not tell her about school or town any more. She did not ask questions any longer. He told her each time when they would meet again" which demonstrates how they only wanted a physical relationship and nothing else. They couldn't even talk to each other any more but they loved having their physical relationship. Their culture has taught them what they are doing is dirty and horrible. "He was a popular boy. He was in the second then the first soccer team" demonstrates although he progress to become educationally better inside he's becoming morally worse (due to the emphases he may receive from his upbringing in becoming more dignified in order to altar his social prestige) . From this quote I've also noticed things only get better for Paulus as he learns to drive, he studies at university, he looks after his fathers farm, he becomes popular at school and he's in the football team but as for Thebedi things only get worse as she loses her only white friend, she's forced to lie to her family, she's forced to get married, she gets pregnant, no one believes her case, the man she thought she trusted betrayed her and she was in a dead end job so while he progresses forward she progressively gets worse. ...read more.

Culture is so different and we can't judge other people on this. They could easily do the same to our culture. Our minds are molded by our culture which is why, as we grow, we prefer what ever culture we have and what it has taught us in life. As I compare my culture to Veronica's I realised hers is a bit farfetched and much different compared to mine but different cultures can be seen in different angles. Our minds adapt as we grow according to our culture. Of course some people would like a freer culture but their ideas in culture change as they grow. An example of this is Manak's life. In A Stench of Kerosene Manak didn't like the idea of marrying again but maybe as he grows he might decide to change his mind on arranged marriages. There is a huge difference between English culture and the cultures in the three short stories. We do not have the right to judge other people on their cultural beliefs as they could do the same to us. We all have different cultures and when we have adjusted ourselves to them we get used to them and keep them. In these three short stories it is clear that culture plays the biggest role and is put before love. In every story culture was victorious at the end. This doesn't mean it's a bad thing because, for example, if a middle aged woman from North India had read A Stench of Kerosene she is most likely to think it had a good ending. At the end of A Stench of Kerosene Culture came before love, at the end of Veronica culture came before personal options and at the end Country Lovers culture came before free will. I would like to finish off saying we all have different cultures and we can all adapt to it as we grow but we shouldn't judge other peoples cultures because our culture could easily be judged. ?? ?? ?? ?? English: Different cultures [Coursework assignment] Nabil Ali 10MY ...read more.