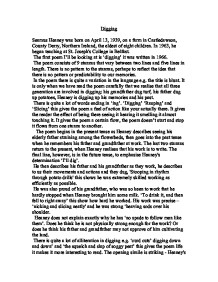 Digging Seamus Heaney was born on April 13, 1939, on a farm in Castledawson, County Derry, Northern

Digging Seamus Heaney was born on April 13, 1939, on a farm in Castledawson, County Derry, Northern Ireland, the eldest of eight children. In 1963, he began teaching at St. Joseph's College in Belfast. The first poem I'll be looking at is 'digging' it was written in 1966. The poem consists of 9 stanzas that vary between two lines and five lines in length. There is no pattern to the stanzas, perhaps to reflect the idea that there is no pattern or predictability to our memories. In the poem there is quite a variation in the language e.g. the title is blunt. It is only when we have read the poem carefully that we realise that all three generation are involved in digging: his grandfather dug turf, his father dug up potatoes, Heaney is digging up his memories and his past. There is quite a lot of words ending in 'ing'. ...read more.

He was also proud of his grandfather, who was so keen to work that he hardly stopped when Heaney brought him some milk. 'To drink it, and then fell to right away' this show how hard he worked. His work was precise - 'nicking and slicing neatly' and he was strong 'heaving sods over his shoulder. Heaney does not explain exactly why he has 'no spade to follow men like them'. Does he think he is not physically strong enough for the work? Or does he think his father and grandfather may not approve of him cultivating the land. There is quite a lot of alliteration in digging e.g. 'curd cuts' digging down and down' and 'the squelch and slap of soggy peat' this gives the poem life it makes it more interesting to read. The opening simile is striking - Heaney's pen is 'snug as a gun'. ...read more.

This helps to make what he describes more vivid, this gives very good imagery. The final stanza almost brings the poem round full circle. It repeats the opening lines: 'Between my finger and my thumb The squat pen rests.' Yet the gun image is replaced by 'I'll dig with it.' His pen becomes a metaphorical spade. This suggests that his pen is his tool, just as the spades were tools for his father and grandfather. It also suggests that Heaney wants to 'go back to his roots' to dig into his past through his writing. There is a lot of repetition in the poem, the words "dig' and "digging" are used. This shows the importance of digging, for peat and potatoes, it also show how it is part of his families heritage and has been going or generations. A few lines near the beginning of the poem have fairly conventional rhymes: thumb/gun, sound/ground/down; thereafter the poem is unrhymed, though there are repeated sounds such as the echoing ing sounds in 'nicking and slicing neatly, heaving sods' ?? ?? ?? ?? ...read more.