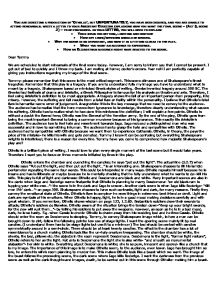 YOU ARE DIRECTING A PRODUCTION OF 'OTHELLO', BUT UNFORTUNATELY, YOU HAVE BEEN INJURED, AND YOU ARE UNABLE TO ATTEND REHEARSALS. WRITE A LETTER TO YOUR ASSISTANT DIRECTOR EXPLAINING HOW YOU WANT THE FINAL SCENE - (ACT 5, SCENE 2) - TO BE PERFORMED. IN YOUR LETTER, YOU WILL NEED TO EXPLAIN: * YOUR IDEAS FOR SETTING, LIGHTING AND COSTUME * HOW KEY LINES/SPEECHES SHOULD BE SPOKEN. * WHY THE SCENE IS SO IMPORTANT, AND HOW IT IS A FITTING CLIMAX TO THE PLAY. * WHAT YOU WANT AN AUDIENCE TO EXPERIENCE. * HOW AN ELIZABETHAN AUDIENCE MIGHT HAVE REACTED TO THE SCENE. Dear Tommy We are scheduled to start rehearsals of the final scene today. However, I am sorry to inform you that I cannot be present. I got out of bed to quickly and I threw my back. I am resting at home; doctor's orders. Fear not! I am perfectly capable of giving you instructions regarding my image of the final scene. Tommy: please remember that this scene is the most critical segment. This scene climaxes one of Shakespeare's finest tragedies. Remember that this play is a tragedy. If you are to understand fully my image you have to understand what is meant by a tragedy. Shakespeare based or mimicked Greek styles of writing. Greeks invented tragedy around 500 BC. The Greeks had festivals of drama and Aristotle, a Greek Philosopher is famous for his analysis on theatre and arts. Therefore, I feel using Aristotle's definition to be most appropriate. A tragedy shows the fall of an important person from prosperity, into misery. However, the suffering and fall results from a fatal flaw or frailty within the personality. I believe that Othello's fatal flaw is hamartia- some error of judgement. Anagnorisis- this is the key message that we need to convey to the audience. The audience has to realize that the hero moves from ignorance to knowledge, therefore clearly understanding what causes his suffering. ...read more.

The dousing of the candles leads up to this part: Othello leaning over the bed and kissing Desdemona. The effect is Othello's physical shadow covers Desdemona. Now Tommy I think you may be wondering the significance of the candles. The candles represent Desdemona's life; light represents life. Tommy please understand this next scene, I believe it is a great image. After Othello kisses Desdemona she wakes. The scene at this point is still dark as Othello has doused half of the candles leaving an eerie atmosphere. This atmosphere, the audience has to realize, is the total opposite of what it was a few days ago. Tommy remember that Othello is a newly wed, if you have forgotten that I am sure the audience will. A subtle prop to reiterate my point: a rack with a wedding gown hung on. This reminds the audience that the wedding was so close to the horrible events. Desdemona is still treasuring her gown. The dressing gown is also a time prop- the audience has to understand that the feelings that Othello has for Desdemona changes so dramatically because of Iago. This also helps to show Shakespeare point, not only can a man fall from great power but the fall can be quick- a result of the man's own flaw. This help to build even more resentment towards Iago. As Desdemona wakes I want the house lights to slowly brighten. The effect that I am trying to achieve is the close connection between life and light. Desdemona wakes therefore in theory so does her sprit; her sprit is symbolised by the use of the stage lights. When Othello reveals his intentions to Desdemona "Then heaven, Have mercy on me..." is what Desdemona replies (5.2.33). Othello has just revealed that he wants to kill her. Desdemona had no clue why her lover wants to kill her. At this point Desdemona is confused. ...read more.

At that time black people were still thought to be inferior to the white race; black men were not smart or noble. In Othello Shakespeare challenges the fact that there can be a smart and successful black man. In Othello the black man controls a lot of white men, is wealthy and has a lot of power. Is this play against the black race, that is debatable. On one side Shakespeare commends the black race on their quick decision making abilities and there nobility. Shakespeare also gives Othello a beautiful wife, lusted by many white men, who chooses him over wealthy nobleman. However, Shakespeare also allows Othello to be manipulated by Iago. Is Shakespeare trying to say that black men are foolish, we don't know? In Elizabethan England, arranged marriages were very common. The fact that Brabantio liked Othello before, "Her father loved me...", tells us something. Brabantio enjoyed the companionship and the anecdotes of Othello's past however; Brabantio did not want Othello as a son. Tommy, Othello is one of the most powerful men in Venice; Othello has power, wealth and respect. Why does Brabantio dislike the idea of having Othello as his son? We can suggest that it's a result of Othello's race. Therefore, I can say that Brabantio and Iago are r****t. Iago is the white monster who destroys Othello because of his secret motives. I believe that Othello acts foolishly because of Iago. Othello's race and position leads to Iago's insecurity therefore, leading him to do manipulate Othello. Othello and Desdemona go against the normality and get married, without the permission of Desdemona's father. The awkwardness of an inter-racial marriage, at that time, is immense. Shakespeare shows us a marriage ending badly. The audience should feel pity towards the couple as they are rebels, daring enough to try their love. We want the lovers to succeed, sad how Othello breaks. Tommy, please follow my instructions carefully. Sorry again for my absence and I should be able to attend opening night. Othello is a great play and I want to do some justice to Shakespeare's masterpiece. Thank you, Steven Limandibrata ...read more.