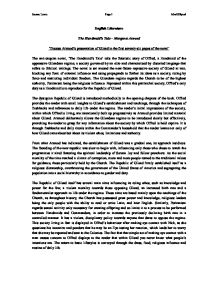 'Discuss Atwood's presentation of Gilead in the first seventy-six pages of the novel'.

English Literature The Handmaid's Tale - Margaret Atwood 'Discuss Atwood's presentation of Gilead in the first seventy-six pages of the novel' The anti-utopian novel, 'The Handmaid's Tale' tells the futuristic story of Offred, a Handmaid of the oppressive Gileadean regime, a society governed by an elite and characterised by distorted language that refers to Biblical writings. The novel is set around the near-future repressive society of Gilead at war, blocking any form of external influence and using propaganda to further its ideas as a society, ruling by force and restricting individual freedom. The Gileadean regime regards the Church to be of the highest authority, Puritanism being the religious influence. Repressed within this patriarchal society, Offred's only duty as a Handmaid is to reproduce for the Republic of Gilead. The dystopian Republic of Gilead is introduced methodically in the opening chapters of the book. Offred provides the reader with small insights to Gilead's establishment and teachings, through the techniques of flashbacks and references to daily life under the regime. The reader's initial impressions of the society, within which Offred is living, are intentionally built up progressively as Atwood provides limited material about Gilead. Atwood deliberately allows the Gileadean regime to be introduced slowly but effectively, provoking the reader to grasp for any information about the society by which Offred is held captive. ...read more.

Within Gilead, the Handmaids are denied their identity, as their own names are erased and replaced with the name of whom they are assigned to. The names of the Handmaids themselves are patronymic, derived from the names of their Commanders, for example, Offred's Commander's forename was Fred, and so she became 'of Fred'. The language used within the social hierarchy to label a particular section is communicative of a specific group's function and status. The name 'Commander' reveals not only the rank but also the high regard that these individuals demand, indicating that they possibly had something to do with the founding of Gilead and its authority. The sentinels and protectors of Gilead as a state, the 'Eyes', 'Guardians' and 'Angels', although initially misleading, their names communicate their purpose. The 'Eyes', who are the secret police within the regime, can be recognised as spies, the 'Guardians' are the members of the police force and can be understood as the protectors of Gilead and the 'Angels' are the soldiers of the Gileadean army, who are saving Gilead from defeat. Similarly, the 'Marthas' are female servants within a Commander's household, acting as cooks or housekeepers, their names based on a Biblical reference to the story of Martha and Mary, where Martha did all the housework during Jesus' visit. Additionally, the people known as Econowives, who are the wives of the 'common men', are those who are separate from and below the Gileadean reproductive administration. ...read more.

Personally, and I believe for many others, that the Gileadean regime would be an unbearable one to be living under not only due it's oppressive attitude and limitations on individual freedom, but its outlook towards women, seeing them only necessary for breeding purposes. To progress from a society where freedom is a right, to a reign of a restrictive religious dictatorship would prove to be too much for many to contemplate. However, I can appreciate Atwood's criticisms of modern society reaching its extreme, to the point where a backlash would occur and a return to traditional values would be expected. In this case, the extreme end product of such a backlash was the succession of the society of Gilead, a warning from Atwood of the polar opposite of the lives of freedom and independence that we lead today. In conclusion, I believe that Atwood's presentation of such a violently existent society is effective in its ability to provoke thought from the readers of the novel. The display of such an extreme regime in the novel, in comparison to those of which we live under today, arouses necessary consideration from the reader about the world we are living in. The presentation of Gilead itself within the first seventy-six pages of the novel, with its religious absolutist morality, violent approach towards rebels and absurdly oppressive limitations on people's lives in terms of independence, dress and food, is a warning from Atwood about the way in the world is pushing the boundaries of morality. Joanna Lowe Page 1 Mrs Hillyard ...read more.