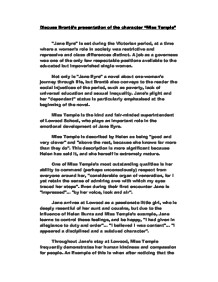 Discuss Bront's presentation of the character

Discuss Bront�'s presentation of the character "Miss Temple" "Jane Eyre" is set during the Victorian period, at a time where a women's role in society was restrictive and repressive and class differences distinct. A job as a governess was one of the only few respectable positions available to the educated but impoverished single women. Not only is "Jane Eyre" a novel about one-woman's journey through life, but Bront� also conveys to the reader the social injustices of the period, such as poverty, lack of universal education and s****l inequality. Jane's plight and her "dependant" status is particularly emphasised at the beginning of the novel. Miss Temple is the kind and fair-minded superintendent of Lowood School, who plays an important role in the emotional development of Jane Eyre. Miss Temple is described by Helen as being "good and very clever" and "above the rest, because she knows far more than they do". This description is more significant because Helen has said it, and she herself is extremely mature. ...read more.

It is of no coincidence that Bront� choose to coincide Miss Temple's arrival into the schoolroom with the moon's light "streaming in through a window near". Bront� throughout the novel uses weather to set the mood of a character. It could be interpreted that Miss Temple was compared to the moon light, leading people through the dark night, leading/guiding people through problems in their lives. Jane's time at Gateshead Hall was one of misery and anguish. She was subjected to domestic tyranny, and abused by her cousin John Reed continually. Jane, from her "very first recollections of existence" had been told that she had better not think herself "on an equality with the Misses Reed and Master Reed" and that it was her "place to be humble". At Gateshead she was made to feel like a "discord" and a person "not worthy of notice". Even the servants treated her with inferiority, because of her "dependant" status, which in Victorian society was viewed without compassion. ...read more.

It is through Miss Temple's influence that Jane deals successfully with situations that occur later in her life, including leaving Gateshead and refusing to marry St John. Another example of Miss Temple's great influence on Jane, comes later on in her life after Jane has left Lowood and taken up a post as the governess to a little French child named 'Adele'. Jane becomes very like Miss Temple and resembles her character in many ways. Despite her pupil being resentful and unwilling to learn Jane is patient with her until she becomes "obedient and teachable." Charlotte Bront� presents the character "Miss Temple" as a kind, warm-hearted women and someone who is very compassionate towards her pupil's welfare. Miss Temple shows respect towards others and in return, gains respect from children and teachers alike. She resents punishing pupils and instead encourages their attributes. Miss temple is the major role model for Jane as well as a friend and confidant. Miss Temple is sorely missed when she leaves the school to be married. ...read more.