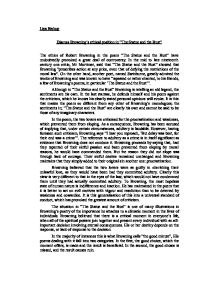 Discuss Browning's ethical position in &quot;The Statue and the Bust&quot;.

To Browning, the most hopeless state of human nature is indifference and inaction. He has maintained in the poem that it is better to act on evil motives with vigour and resolution than to be deterred by weakness and cowardice. It is this generalisation of this into a universal standard of conduct, which has provoked the greatest amount of criticism. The situation in "The Statue and the Bust" is one of many illustrations in Browning's poetry of the importance he attaches to a climatic moment in the lives of individuals. Browning believed that there is a critical moment in everyone's life, when all of the spiritual powers join together and present every individual with an all-important decision involving eternal consequences. His or her destiny depends on the response, or lack of response to the decision. In the majority of instances this is what Browning calls "the good minute", His poems dealing with it fall into two categories. In the first, the good choice, which the moment offers, is made and the result is beneficial. ...read more.

It is not difficult to comprehend that, since the development of the soul is dependent on a moral struggle, the existence of evil is necessary in order that in combating it man's character may be shaped and God's purpose for him realised. But what about the sinner who makes the wrong choice and follows the path of evil? For Browning, since God is ultimately omnipotent as well as all loving, every sinner must be redeemed. If the will is alive, if a man acts with energy and courage even in pursuit of an evil end, there is hope for him. On the other hand, if a man's will is dead, if through weakness or cowardice he refuses to act at all, his passivity is a worse sin than that of an active evildoer. His belief that, if God is omnipotent, evil must initially be transmuted, by no means implies that he is blind to the moral distinction between good and evil, or in any way implies "Let us do evil that good may come". This has been the most commonly occurring misinterpretation of the sentiments of Browning expressed in this poem. ...read more.