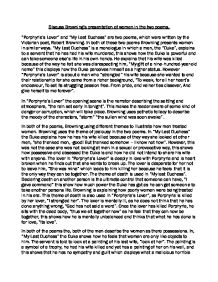 Discuss Browning's presentation of women in the two poems. "Porphyria's Lover" and "My Last Duchess" are two poems, which were written by the Victorian poet, Robert Browning. In both of these two poems Browning presents women in similar ways. "My Last Duchess" is a monologue in which a man, the "Duke", explains to a servant that he has had his wife murdered, this shows how the Duke is powerful and can take someone else's life in his own hands. He explains that his wife was killed because of the way he felt she was disrespecting him, "My gift of a nine-hundred-year-old name" this displays how the Duke perceives himself as a higher status. However "Porphyria's Lover" is about a man who "strangled" his wife because she wanted to end their relationship for she came from a richer background, "To weak, for all her heart's endeavour, To set its struggling passion free. From pride, and vainer ties dissever, And give herself to me forever". ...read more.

The theme of death is used in "My last Duchess". Declaring death on another person is the ultimate control that someone can have, "I gave command" this show how much power the Duke has got as he can get someone to take another persons life. Browning is explaining how poorly women were being treated in his era. This theme of death is also used in "Porphyria's Lover", as Porphyria is killed by her lover, "I strangled her". The lover is mentally ill, as he does not think that he has done anything wrong, "God has not said a word". Once the lover has killed Porphyria, he sits with the dead body, "thus we sit together now" as he feel that they can now be together, this shows how he is mentally unbalanced and thinks that what he has done is for love, "its love". In both of the poems the, both of the men describe the women as there possessions. In, "My Last Duchess" the Duke shows how he feels that women are only like objects to him. ...read more.

This is seen in a different way than, "My Last Duchess". The lover is mentally ill and thinks he is doing the right thing, "and I, its love, am gained instead" he thinks that Porphyria wants to be with him and this is the only way it can be achieve. Even after Porphyria is dead the lover keeps the body, "I propped her head up as before" this is a insane thing to do and uses her body like a manikin. Browning wrote the two poems because there is a moral to them. Browning explains in his two poems how women were ill-treated in his time. Browning disagrees with the attitudes towards women. He explains that women were looked upon as the weaker s*x and that they were treated like the lover class. This may just mean that men look down on women, since in, "Porphyria's Lover" Porphyria has a well-bred name and the lover always stays anonymous. This shows how women were portrayed as unstable, but this was not so, Browning shows how the two male lovers in the poems are the unstable ones why result to murder through jealousy2. ...read more.