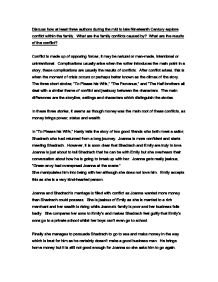 Discuss how at least three authors during the mid to late Nineteenth Century explore conflict within the family. What are the family conflicts caused by? What are the results of the conflict?

Discuss how at least three authors during the mid to late Nineteenth Century explore conflict within the family. What are the family conflicts caused by? What are the results of the conflict? Conflict is made up of opposing forces, it may be natural or man-made, intentional or unintentional. Complications usually arise when the writer introduces the main point in a story, these complications are usually the results of conflicts. After conflict arises, this is when the moment of crisis occurs or perhaps better known as the climax of the story. The three short stories; "To Please his Wife," "The Parvenue," and "The Half-brothers all deal with a similar theme of conflict and jealousy between the characters. The main differences are the storyline, settings and characters which distinguish the stories. In these three stories, it seems as though money was the main root of these conflicts, as money brings power, status and wealth. In "To Please his Wife," Hardy tells the story of two good friends who both meet a sailor, Shadrach who had returned from a long journey. Joanna is more confident and starts meeting Shadrach. However, it is soon clear that Shadrach and Emily are truly in love. Joanna is just about to tell Shadrach that he can be with Emily but she overhears their conversation about how he is going to break up with her. ...read more.

During the Victorian period, women were viewed as weak without men because they had no status and without a man to support the household or give them that status. The Victorian Period wasn't a perfect time to live in. Life wasn't easy compared to how it is nowadays, especially for a single parent being a woman. William Preston became very jealous after he realised his wife loves her son more than him, "he took a positive dislike to Gregory." His wife died soon after giving birth to her second son(the narrator). Just before she died, she tells Gregory and her new son to look out for each other. As the two step-brothers grew up, we can see that they were two very different people. We see that the narrator was the "darling", "the tenderly beloved," and "the young master." In contrast, Gregory was described as "lumpish and loutish", "awkward and ungainly". The narrator is given everything he wants including good education whereas Gregory is forced to work as a Sheppard. The narrator admits that he also treated Gregory badly, following his father's example, he feels guilty, "I am ashamed my heart is sore my poor orphan stepbrother." One day, the narrator goes on an errand and gets lost in a snow storm. ...read more.

He is scared of his wife so he backs out of the conflicts which makes the matter worse as the wife takes advantage of this to gain more power and the conflict impact worsens. Like Shadrach, Gregory from " The Half-Brothers" has a flaw or weakness of being too decent and kind but the only difference was that the conflict was not caused because of his personality but because of the jealousy of his stepfather towards him. The husband of the narrator in "The Parvenue" did not make much effort in understanding his wife and what she does. Instead he becomes angry at her and asks her to choose between himself or her family. One flaw in his character forces those around him Conclusion In the three short stories, the conflicts had been caused by marriage, fuelled by wealth to end up as disaster. The main reasons behind the conflicts are often over money problems and jealousy. The ending of "The Half-Brothers" seemed more tragic compared to the other two stories as it was an extremely emotional and symbolic story. This results in the sympathetic attitude of the reader towards this character. Similarly, all three of these stories ended in a sad dramatic way and they were all set around the same time. This may suggest that during that time period, it involved a lot of conflicts. ...read more.