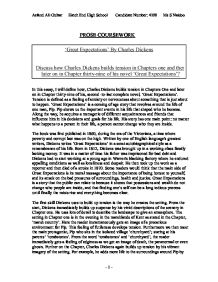 Discuss how Charles Dickens builds tension in Chapters 1 and in Chapter 39 of his novel Great Expectations?

PROSE COURSEWORK In this essay, I will define how, Charles Dickens builds tension in Chapters One and later on in Chapter thirty-nine of his, second -to-last complete novel, 'Great Expectations'. Tension is defined as a feeling of anxiety or nervousness about something that is just about to happen. 'Great Expectations' is a coming of age story that revolves around the life of one man, Pip. Pip shows us the important events in his life that shaped who he became. Along the way, he acquires a menagerie of different acquaintances and friends that influence him in his decisions and goals for his life. His story has one main point: no matter what happens to a person in their life, a person cannot change who they are inside. The book was first published in 1860, during the era of the Victorians, a time where poverty and corrupt law was on the high. Written by one of English language's greatest writers, Dickens writes 'Great Expectations' in a semi-autobiographical style as a remembrance of his life. Born in 1812, Dickens was brought up in a working-class family lacking money. It was in a matter of time his father was imprisoned for bad debt and Dickens had to start working at a young age in Warren's blacking factory where he endured appalling conditions as well as loneliness and despair. He then took up the work as a reporter and then died of a stroke in 1870. Some readers would think that the main side of Great Expectations is its moral message about the importance of being honest to yourself, and its attack on the bad pressures of surroundings, health and justice. ...read more.

Furthermore, in the same line he says, 'stormy and wet, stormy and wet'. Here we see Dickens using repetition to reinforce the unbearable weather conditions hence creating tension. Moreover he also states, 'mud, mud, mud'. Here he uses repetition to emphasize devastation and evil which maybe present. It also reminds the reader of the marshes in Chapter one. He is indicating danger for Pip and foreshadowing the convict. In addition, soon after he writes, 'vast heavy veil'. Here he is using a metaphor to describe the clouds and how it seems like the entire town is trapped in it which could build up tension for the reader. What's more, Dickens keeps building up tension when he says,' Eternity of cloud and wind. So furious had been the gusts'. In the first part of the sentence Dickens is signifying the unstopping rush of rain and wind. This quote can also be connected with, 'In every rage of wind and rush of rain'. Additionally, in the second part of the sentence Dickens uses personification to depict the weather which could the build up anxiety. Overall Charles Dickens has used the weather to great effect by us, the reader, wonder about how the weather conditions will either harm Pip or build up to more catastrophic events. Additionally, Dickens also builds up tension in Chapters one and thirty nine by the way he portrays the lead character, Pip. In chapter one, Dickens uses descriptions to depict a sympathetic Pip which could hence lead to the build up of suspense. ...read more.

Here the reader can get an image of a person who is violent and perhaps a pirate. This is then reinforced as Pip describes him as a 'pirate'. This builds up suspense because pirates are always known as people who commit offences. The reader then gets to know that the Convict is quite religious or spiritual, 'Lord strike me dead!' The convict then touches Pip, 'He laid his hands on my shoulder'. Here Pip reacts negatively with the contact he has made with the Convict so tension is rising. Near the ending of the chapter the reader gets to know that the convict has a weapon, 'thought he had a pistol lying on the pillow'. Here tension rises because a pistol is a symbol of death. Hence this makes the chapter end on a fearful note. In conclusion, I think Charles Dickens uses a variety of techniques to build up tension to in Chapters one and then later on in Chapter thirty nine. We see that the skills used by Dickens to build up tension have a major influence in how the reader feels and their perception on the book. In my opinion the most effective technique Dickens has used to build up suspense is his vivid descriptions of the scenery. I think this because he uses lots of detail to describe the landscape which gives an atmosphere. Hence by doing this he builds a lot of tension which has a major impact on the reader. ?? ?? ?? ?? Asfand Ali Gulzar Hatch End High School Candidate Number: 4108 Ms S Naidoo - 1 - ...read more.