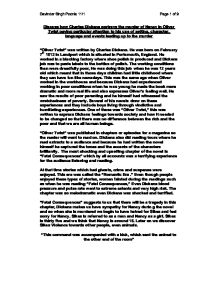 Discuss how Charles Dickens portrays the murder of Nancy in Oliver Twist paying particular attention to his use of setting, character, language and events leading up to the murder.

Discuss how Charles Dickens portrays the murder of Nancy in Oliver Twist paying particular attention to his use of setting, character, language and events leading up to the murder "Oliver Twist" was written by Charles Dickens. He was born on February 7th 1812 in Landport which is situated in Portsmouth, England. He worked in a blacking factory where shoe polish is produced and Dickens job was to paste labels to the bottles of polish. The working conditions then were dreadfully poor, He was doing this job when he was 12 years old which meant that in those days children had little childhood where they can have fun like nowadays. This was the same age when Oliver worked in the workhouse and because Dickens had experienced working in poor conditions when he was young he made the book more dramatic and more real life and also expresses Oliver's feeling well. He saw the results of poor parenting and he himself had witnessed the wretchedness of poverty. Several of his novels draw on these experiences and they include boys living through vindictive and humiliating experiences. One of these was "Oliver Twist," this was written to express Dickens feelings towards society and how it needed to be changed so that there was no difference between the rich and the poor and that we are all human beings. "Oliver Twist" was published in chapters or episodes for a magazine so the reader will want to read on. Dickens also did reading tours where he read extracts to a audience and because he had written the novel himself he captured the tones and the accents of the characters brilliantly. The most shocking and upsetting chapter of the novel is "Fatal Consequences" which by all accounts was a terrifying experience for the audience listening and reading. At that time stories which had ghosts, crime and suspense were enjoyed. This era was called the "Romantic Era." ...read more.

Priestley did when he wrote " An Inspector calls. "Fatal Consequences" is a melodramatic scene. Fagin tells Sikes not to be too violent. "You won't be-too-violent, Bill?" Here Dickens uses dashes for emphasis and also the main word which tells the audience about Bill is " Violent" These is a adjective and it builds up tension. Fagin wants Bill to hurt Nancy but not to kill her because of the consequences they will face. Both Fagin and Sikes are furious and wants to hurt Nancy we find this out here: "....fire in the eyes of both," This is imagery which has an great impact on the audience. It tells us they are consumed with rage. Fagin then says to Sikes: "not too violent for safety. Be crafty, Bill, and not too bold" He is saying to Sikes to be careful, clear and crafty. Sikes does not reply which make him sinister. Sikes "dashed" out "into the silent streets." The word "dashed shows Sikes anger and that he went quickly. This is a very emphatic word. "Silent streets" has a use of alliteration. " Without one pause, or moments consideration: without once turning his head to the right or left, or raising his eyes to the sky, or lowering them to the ground, but looking straight before him with savage resolution: his teeth so tightly compressed that the strained jaw seemed starting through his skin: the robber held on his headlong course, not muttered a word, nor relaxed a muscle. Until he reached his owndoor. He opened it, softly, with a key..." All these lines have semi-colons which add emphasis. Also repetition is used to add emphasis. Sikes doesn't look anywhere but just looks straight and is focused on one thing which is anger against Nancy. This builds up tension and also makes us want to read on more "Without one pause nor moments considerations" This shows us Sikes anger, "Savage resolution." ...read more.

The hair on it burnt straight away. He then washed himself and rubs his clothes and there are spots that will not be removed so he cuts the pieces out and burns them. The dog's feet are b****y and there are stains all around the room. Because there is a dead body he is scared that it might come up to him so he just walks straight ahead without looking back. He forgets to wipe dogs feet so that is evidence of the murder. He shuts the door softly, takes the key and goes. He's a burglar so he is good at this. There is a reference of sun again also: "He crosses over, and glanced up at the window, to be sure that nothing was visible from outside. There was the curtain still drawn, which she would have opened to admit the light she never saw again. It lay nearly under there. He knew that. God, how the sun poured down upon the very spot!" This reminds us of Nancy opening the curtains. In this chapter there is symbolism of light and dark. Also another novel which Dickens wrote which has a ghost is "The Christmas Carol." The Victorians believe in ghosts, Sikes imagination makes him more terrified and believes Nancy is a ghost. The romantic era believed in ghosts and Dickens believed in ghosts is well. There is this connection of ghosts which makes this part of the novel very dramatic. In Conclusion Dickens portrays the murder very dramatically and with the use of melodrama it has a great emphasis on the audience. I think it is very effective and very touching because oh how he creates sympathy for her in the beginning. The Victorian audience would have been very shocked and some in tears and even fainted, also Dickens blood pressure and pulse rate went to a very high risk and he could have died. I found this scene very dramatic and very shocking and I can vividly imagine the murder scene because it is very detailed. Davinder Singh Poonia 11/1 Page 1 of 9 ...read more.