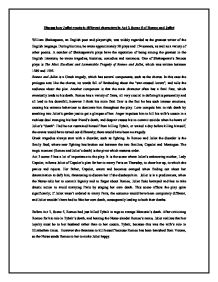 Discuss how Juliet reacts to different characters in Act 3, Scene 5 of Romeo and Juliet

Discuss how Juliet reacts to different characters in Act 3, Scene 5 of Romeo and Juliet William Shakespeare, an English poet and playwright, was widely regarded as the greatest writer of the English language. During his time, he wrote approximately 38 plays and 154 sonnets, as well as a variety of other poems. A number of Shakespeare's plays have the reputation of being among the greatest in the English literature, he wrote tragedies, histories, comedies and romances. One of Shakespeare's famous plays is The Most Excellent and Lamentable Tragedy of Romeo and Juliet, which was written between 1589 and 1595. Romeo and Juliet is a Greek tragedy, which has several components, such as the chorus. In this case the prologue acts like the chorus, its words full of foreboding about the "star-crossed lovers", and tells the audience about the plot. Another component is that the main character often has a fatal flaw, which eventually leads to his death. Romeo has a variety of flaws, all very crucial in defining his personality and all lead to his downfall; however I think his main fatal flaw is the fact he has such intense emotions, causing his extreme behaviour to dominate him throughout the play. ...read more.

This is an excellent example of dramatic irony, because the audience knows Juliet never sees Romeo alive again after this. As Romeo descends the balcony, Juliet has a vision, "Methinks I see thee now, thou art so low, as one dead in the bottom of a tomb. Either my eyesight fails, or thou look'st pale." To which Romeo replies, "And trust me, love, in my eye so do you: Dry sorrow drinks our blood. Adieu, adieu!" This is very portentous; Juliet says to Romeo that you look like you're dead and he says so you do, these final words are full of apprehension, and dramatic irony, because the audience knows that the next time they meet, will be on their deathbed. Unaware that Juliet is married to Romeo, Lady Capulet mistakes Juliet's tears as continued grief for Tybalt and tries to comfort her by telling her of her plan to poison Romeo. Juliet elaborates on this with double meanings in everything she says. She never actually lies to her parents because it is a sin and in Elizabethan times, Juliet was a very strict Catholic. "Indeed I never shall be satisfied With Romeo, till I behold him - dead - Is my poor heart, so for a kinsman vexed..." ...read more.

The Nurse, who has been more of a mother figure to Juliet than her biological mother, fails Juliet at this critical moment. The Nurse advises her to go through with the marriage to Paris and forget the "dishclout" Romeo. Disgusted and betrayed by her Nurse's disloyalty, Juliet sarcastically thanks her, "well, thou hast comforted me marvellous much" and tells the Nurse that she is going to make confession at Friar Lawrence's. As she hurries to the Friar, she vows to never again trust the Nurse's counsel, "Ancient damnation! O most wicked fiend!" Shakespeare has systematically taken away every support Juliet has, his intention is for the play to be a tragedy; her primary family had abandoned her, while Juliet's isolation is nearly complete, she is calm and resolute and comments to herself "If all else fail, myself have the power to die." This says a lot about her character; Juliet has no control over anything in her life, except for taking it. If the play was written now, this scene would be completely different. The amount society has evolved compared to the 16th century is drastic; many conversations and factors that were shocking then would have no effect now. However what would always be the same is how Shakespeare portrayed love in Romeo and Juliet. It is a brutal, powerful emotion that captures individuals and catapults them against their world, and, at times, against themselves. ?? ?? ?? ?? ...read more.