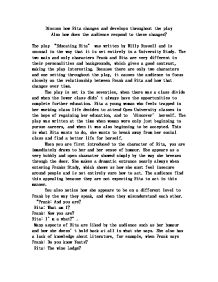 Discuss how Rita changes and develops throughout the play

Discuss how Rita changes and develops throughout the play Also how does the audience respond to these changes? The play "Educating Rita" was written by Willy Russell and is unusual in the way that it is set entirely in a University Study. The two main and only characters Frank and Rita are very different in their personalities and backgrounds, which gives a good contrast, making the play interesting. Because there are only two characters and one setting throughout the play, it causes the audience to focus closely on the relationship between Frank and Rita and how that changes over time. The play is set in the seventies, when there was a class divide and when the lower class didn't always have the opportunities to complete further education. Rita a young woman who feels trapped in her working class life decides to attend Open University classes in the hope of regaining her education, and to 'discover' herself. The play was written at the time when woman were only just beginning to pursue careers, and when it was also beginning to be accepted. This is what Rita wants to do, she wants to break away from her social class and find a better life for herself. ...read more.

"In response to the question, 'suggest how you would resolve the staging difficulties inherent in a production of Ibsen's Peer Gynt', you have written quote, 'Do it on the radio', unquote." She then began to read more books and go to the theatre, which inspired her enormously. It caused her to become interested in literature and become somebody she felt more comfortable with. The turning point of the play, I feel is when Rita leaves her husband. I think this is an important part because it is when Rita is no longer dominated by her lower class life. It is as if she has left that social class behind, and is ready to move on and be accepted as middle class. Rita's husband Denny, did not approve of Rita becoming educated he wanted her to be a 'stay at home' wife and have a baby. Denny couldn't understand why she hated her life so much and why she wanted to be part of something else. He, like Frank didn't want Rita to change but to keep her as she was. His way of thinking is mirrored earlier on in the play by Rita when she calls the course "degrees for dishwashers". When Rita leaves her husband, she has her freedom back and can now concentrate fully on her university course. ...read more.

When Rita see's her friend Trish, who she admired greatly experiencing problems she is shown that being academically together does not always mean you are secure as a person. Rita is shown this also, when Frank collapses after drinking heavily, in a university lecture. Rita looked up to frank seeing him as superior and academically together and she did not expect to see Frank acting in this way in front of pupils, she learns that learning education won't make you happy however it gives you choices, Rita: "But I had a choice. I chose me. Because of what you'd given me I had a choice". Rita changes in both positive and negative ways throughout the play. I think her change overall, is most positive as although she loses her husband, her job and a part of herself what she gains she feels is much more valuable. She has gained an education and a new found confidence in herself. I think Rita does appear as more confident at the end of the play but with this change, she has become less original. The audience preferred the old Rita who made people laugh and wasn't scared to say what she thought, rather than the new person she has become. However Rita feels much more comfortable with her new self, and through this change has provided herself with much more choices, and opportunities. ...read more.