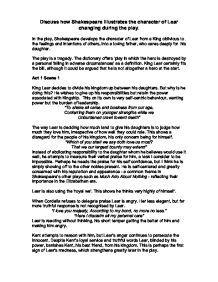 Discuss how Shakespeare illustrates the character of Lear changing during the play.

Discuss how Shakespeare illustrates the character of Lear changing during the play. In the play, Shakespeare develops the character of Lear from a King oblivious to the feelings and intentions of others, into a loving father, who cares deeply for his daughter. The play is a tragedy. The dictionary offers 'play in which the hero is destroyed by a personal failing in adverse circumstances' as a definition. King Lear certainly fits the bill, although it could be argued that he is not altogether a hero at the start. Act 1 Scene 1 King Lear decides to divide his kingdom up between his daughters. But why is he doing this? He wishes to give up his responsibilities but retain the power associated with Kingship. This on its own is very self-centric behaviour, wanting power but the burden of leadership. "To shake all cares and business from our age, Conferring them on younger strengths while we Unburdened crawl toward death" The way Lear is deciding how much land to give his daughters is to judge how much they love him, irrespective of how well they could rule. ...read more.

Kent attempts to reason with him, but Lear's anger continues to persecute the innocent. Despite Kent's loyal service and truthful words Lear, blinded by his power, banishes Kent, his best friend, from his kingdom. This is perhaps the first sign of Lear's madness, which strengthens greatly later in the play. "Thy youngest daughter does not love you the least" "Turn thy hated back upon our kingdom" Act 3 Scenes 2 - 4 Lear is no longer oblivious to his elder daughters' mistreatment of him and realises he was foolish to dismiss Cordelia and Kent. He is initially self-pitying, dropping the 'royal we'. "I never" This shows another change in attitude. On the heath there is a storm. But the storm is an example of pathetic fallacy; it reflects Lear's internal thoughts through a form of personification. Shakespeare shows this in several ways in the scenes. Lear is talking to the storm, but if the storm is a reflection of him, he is essentially talking to himself. Many people consider talking to yourself to be a sign of madness. ...read more.

"Howl, howl, howl, howl!" This is a new form of a combination of blindness and madness. He is unable to see anything other than his favourite daughter Cordelia, although moving away from being self-centric; he is now only able to see her. This is another large shift in character since Act 3. Shakespeare uses repetition to show Lear's emotion. Conclusion At the start of the play Lear is very self-centered and oblivious to the lies he is facing. He then realises the truth, becomes mad due to his actions but also develops a sense of caring for others. Unfortunately the death of Cordelia makes him mad with grief and he is unable to care about anything else. This could be considered similar to the beginning of the play, however I think it is very different, because Lear is no longer 'blind' (at least not as much) and has a reason for his behaviour. I believe the character of Lear provides a strong moral: those who are self-centered and easily blinded by others will have a unhappy ending - perhaps a tragic one. Unfortunately those who might benefit from this moral are unlikely to realise it applies to them. by Greg Auger ...read more.