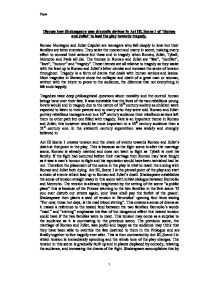 Discuss how Shakespeare uses dramatic devices in Act III, Scene 1 of Romeo and Juliet to lead the play towards tragedy.

Discuss how Shakespeare uses dramatic devices in Act III, Scene 1 of 'Romeo and Juliet' to lead the play towards tragedy. Romeo Montague and Juliet Capulet are teenagers who fall deeply in love but their families are bitter enemies. They seize the moment and marry in secret, making every effort to conceal their actions but these end in tragedy when Romeo, Juliet, Tybalt, Mercutio and Paris all die. The themes in Romeo and Juliet are "fate", "conflict", "love", "honour" and "tragedy". These themes are all relative to tragedy as they assist with the lead up to Romeo and Juliet's bitter demise and increase the sense of tension throughout. Tragedy is a form of drama that deals with human actions and issues. Most tragedies in literature show the collapse and death of a great man or woman, written with the intent to prove to the audience, the dilemma that not everything in life ends happily. Tragedies raise deep philosophical questions about morality and the control human beings have over their fate. It was inevitable that the lives of the two rebellious young lovers would end in tragedy due to the nature of 16th century society as children were expected to listen to their parents and to marry who they were told. Romeo and Juliet portray rebellious teenagers and to a 16th century audience their rebellious actions left them no other path but one filled with tragedy. ...read more.

The tension in this scene is gradually built up and in places displaced by comedy, relaxing the audience, and increasing the drama of the fight. Shakespeare accomplishes this by using different dramatic devices throughout the rest of the scene such as his use of entrances of the characters. Despite the initial tension at the beginning of the scene there is still comedy present. This is in the form of Mercutio teasing Benvolio. He uses a lot of puns and although what Mercutio is saying is in a teasing manner there is still an undertone of violence. "Thou art like one of those fellows...when indeed there is no need". By doing this Mercutio relaxes the audience from the tension but annoys Benvolio. This calming moment is then spiralled by Tybalts entrance, which brings back the tension at a heightened level due to the sudden calm. The tension is also increased as the audience know of the hate between the two families. The conflict that develops between Mercutio and Tybalt is still comedic even at this point in the scene. When Romeo enters on the tension is increased as Tybalt has been looking for him. This is evident as Tybalt states 'here comes my man' upon the arrival of Romeo.Tybalt's use of language changes towards Romeo, although having a comical edge, his language is patronising as he is starting to take his anger out on Romeo. ...read more.

Romeo is affected deeply by this comment and he develops a rage towards Tybalt for the murder of his close friend. This in turn leads to Romeo's murder of Tybalt. Mercutio also states "A plague o' both your houses!" Here he is cursing the Montague's and Capulet's as if it wasn't for their feud this wouldn't have happened. This famous quote is also very ironic later in the play when Friar John tries to deliver Friar Lawrence's message to Romeo that he is not allowed into Mantua, due to fear of the plague. In this scene, the play has shifted into that of a tragedy. The characters have set off a chain of events which can only be resolved through the deaths of Romeo and Juliet. This is the pivotal point of the play and changes the tone for the remainder. It is now impossible for Romeo and Juliet to be together as their fate, set in the prologue, has been triggered and they are both destined to die. In conclusion, Shakespeare's use of dramatic devices in the play Romeo & Juliet are significant as they help to drive the plot and keep the audience entertained. This is justified by analysing the themes in the play; Fate, Conflict, Love, Honour and Tragedy. In addition, certain events in the scene such as Mercutio and Tybalt's deaths are relevant as they influence the behaviour of characters. Romeo's behaviour following these events changes almost immediately as he knows he is now destined to lose the love of his life. ?? ?? ?? ?? Fryer 1 ...read more.