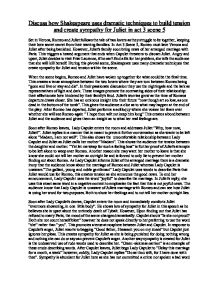 Discuss how Shakespeare uses dramatic techniques to build tension and create sympathy for Juliet in act 3 scene 5 Set in Verona, Romeo and Juliet follows the tale of two lovers as they struggle to be together, keeping their love secret secret from their warring families. In Act 3 Scene 5, Romeo must lave Verona and Juliet after being banished. However, Juliet's family soon bring news of her arranged marriage with Paris. This triggers a heated argument that ends when Capulet threatens to disown Juliet. Angry and upset, Juliet decides to visit Friar Laurence, if he can't find a fix for her problem, she tells the audience that she will kill herself. During this pivotal scene, Shakespeare uses many dramatic techniques that create sympathy for Juliet and tension within the scene. When the scene begins, Romeo and Juliet have woken up together for what could be the final time. This creates a tense atmosphere between the two lovers where they are torn between Romeo being "gone and live or stay and die". ...read more.

To end her announcement, Lady Capulet uses the word "joyful" to describe the marriage. In Juliet's reply, she uses this exact same word in a negative context to emphasise the fact that this is not joyful news. The audience know that Lady Capulet is unaware of Juliets marriage with Romeo and can see how Juliet is using her word for two purposes. Both to show her feelings and to not tell her mother outright lies. Soon after Lady Capulet's decree, Capulet enters the room and immediately comforts Juliet "evermore showering, in one little body". He shows lots of sympathy for Juliet in this speech as he believes she is upset about the untimely death of Tybalt. However, Upon finding out that Juliet has refused to marry Paris, the mood of the scene changes dramatically. Capulet shouts "Is she not proud? Doth she not count herself blest" however he does not speak directly to her preferring to use the word "she" rather than "you". This promotes a tense atmosphere between Juliet and Capulet. ...read more.

O most wicked fiend" Furthermore, she expresses the fact that she would rather die than marry Paris "myself have the power to die". This may give the audience an idea of what may happen later on in the play. The effect of her being alone on the stage creates a close relationship between Juliet and the audience as it is as if she is speaking directly to the audience and can release her innermost secrets. In conclusion, Shakespeare uses many techniques to build tension and create sympathy for Juliet. One way he creates sympathy is by emphasising her attempts and pleas at trying to prevent the arranged marriage going ahead however she is ignored and forced, against her will, to marry Paris. Shakespeare also uses dramatic irony to build up tension within the scene. One example is the audience knowing about Juliet weeping over the departure of Romeo and Lady Capulet walks in, comforting Juliet over the death of Tybalt. All the techniques used add together to create a scene with great tension and large amounts of sympathy for Juliet. Second Draft By David Bruce ...read more.