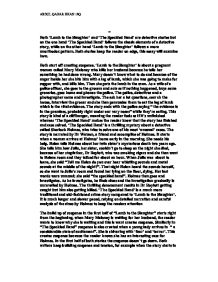 Discuss how suspense and tension are created in 'Lamb to the Slaughter' and 'The Speckled Band' Both 'Lamb to the Slaughter' and 'The Speckled Band' are detective stories but on the one hand 'The Speckled Band' follows the classic elements of a detective story, while on the other hand 'Lamb to the Slaughter' follows a more unorthodox pattern. Both stories keep the reader on edge, this essay will examine how. Both start off creating suspense. 'Lamb to the Slaughter' is about a pregnant woman called Mary Maloney who kills her husband because he tells her something he had done wrong. Mary doesn't know what to do and because of the anger inside her she hits him with a leg of lamb, which she was going to make for supper with, and kills him. Then she puts the lamb in the oven. As a wife of a police officer, she goes to the grocers and acts as if nothing happened, buys some groceries, goes home and phones the police. The police, detectives and a photographer come and investigate. The ask her a lot questions, search the house, interview the grocer and she then persuades them to eat the leg of lamb which is the vital evidence. The story ends with the police saying " the evidence is in the premises, probably right under our very noses" while they're eating. This story is kind of a cliffhanger, meaning the reader feels as if it's unfinished whereas 'The Speckled Band' makes the reader know that the story has finished and case solved. ...read more.

So the reader is told that the key suspect is an interesting and dangerous character. Following this the reader is informed that Julia stoner's death was a 'terrible event'. Her sister also says, "that terrible time has scared in my memory". The reader gets even more interested because this is a mystery that needs to be solved. Likewise in 'Lamb to the Slaughter' the suspense is still being created until Mary hits Patrick with a leg of lamb and kills him. After this the suspense goes right down unlike 'The Speckled Band'. The first half ends with Helen's stepfather Dr Roylott entering. His violence suggests there is more action to come. In the second half of 'Lamb to the Slaughter' the suspense and tension go down until Mary starts thinking about what the consequences of her action will be and what to do next whereas in 'The Speckled Band', in the second half of the story all the actual action takes place. In 'Lamb to the Slaughter', the suspense and tension carry on building when Mary goes to the grocers and acts really normally and this gives the reader a hint that she might not get caught. Equally with 'The Speckled Band' Holmes investigates the house and asks Helen a lot of questions, this tells the reader that he might solve the mystery. The suspense goes down for a while in 'Lamb to the Slaughter' but it builds up gradually when the police and detectives come because the reader is thinking will Helen get caught or not. ...read more.

In 'The Speckled Band', the writer also uses language and dialogue carefully. For example, when Holmes speaks he is very calm and methodical. My personal opinion of the suspense and tension on both stories is that it really does keep the reader on edge and interested. In 'Lamb to the Slaughter' the suspense is created especially in the first half of the story. How the writer builds the suspense and tension is very smart and skilful, he builds it up and after a point of an event it goes down and gives the reader time to get over it and builds it up again. Similarly in 'The Speckled Band' it is very well written and it's designed to keep the reader on edge nearly all the time. But the down side is it's too slow compared to 'Lamb to the Slaughter' especially in the second half of the story. 'The Speckled Band' and 'Lamb to the Slaughter each reflect the 19th and 20th century periods in which they take place. For example, in 'The Speckled Band', the crime is solved and it reflects on a 19th century belief in the power of science to solve everything. Whereas in 'Lamb to the Slaughter' the crime is not solved and it reflects a distrust of authority and its ability to solve problems. So both stories do, as Dr Watson said, "tend towards the unusual and even the fantastic". All in all, they're both very well structured and written with a great deal of suspense. ABDUL QAHAR KHAN 10Q ?? ?? ?? ?? ABDUL QAHAR KHAN 10Q ...read more.