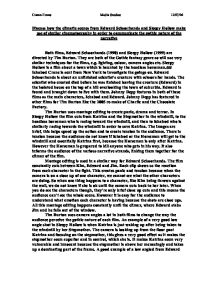 Discuss how the climatic scenes from Edward Scissorhands and Sleepy Hollow make use of similar cinematography in order to communicate the gothic nature of the narrative Both films, Edward Scissorhands (1990) and Sleepy Hollow (1999) are directed by Tim Burton. They are both of the Gothic fantasy genre so will use very similar techniques for the films, e.g. lighting, colour, camera angles etc. Sleepy Hollow is a film about a town which is haunted by the headless horseman. Ichabod Crane is sent from New York to investigate the goings on. Edward Scissorhands is about an unfinished scientist's creature with scissors for hands. The scientist who created died before he was finished leaving the creature (Edward) in the isolated house on the top of a hill overlooking the town of suburbia. Edward is found and brought down to live with them. Johnny Depp features in both of these films as the main characters, Ichabod and Edward. Johnny Depp has featured in other films for Tim Burton like the 2005 re-make of Charlie and the Chocolate Factory. Tim Burton uses montage editing to create panic, drama and terror. In Sleepy Hollow the film cuts from Katrina and the Stepmother in the windmill, to the headless horseman who is racing toward the windmill, and then to Ichabod who is similarly racing towards the windmill in order to save Katrina. ...read more.

The blue lighting representing the moon comes in through a hole in the roof, not only does this in itself add to the gothic mood it also casts shadow. This means that Edward, with his typically gothic style clothes, are nearly completely in shadow when not directly lit, this adds tension and uncertainty into the gothic mood, as we cannot see Edwards facial expressions and his dark clothes add to this. This is quite similar to Ichabod in Sleepy Hollow, as he has quite dark gothic type clothes too. However, the flash-backs in Sleepy Hollow are lit much differently to the real time scenes. They are usually in well-lit areas, for example the scene where the stepmother kills her sister. We can see lots of different colours like reds, greens and yellows, instead of the usual dark colours we are used to from the real time scenes. This is similar to the point of view shot in Edward Scissorhands, when we have the point of view of Edward looking down on the body of Jim after he fell out of the window. The colours we see there are yellows because it is shot at night time, which are different to the whites we sometimes see in Sleepy Hollow for the foggy morning scenes. This shows that the way Tim Burton uses lighting to portrait different things (like flash-backs, tension and the gothic nature of the films as a whole) ...read more.

This shows that sets and props are extremely useful for helping to portrait moods and emotions among the audience, such as fear. They are also useful for contrasting places and people. Music is used in both films by Tim Burton to help build tension in the audience. Especially in Sleepy Hollow where the music has a very gothic feel and typically builds in tempo and volume before a big climax. This is also the same in Edward Scissorhands, for example in the final climatic fight, we hear the music build in tempo and music until Edward stabs Jim and he falls out of the window. The music in both films is quite dramatic, but in Edward Scissorhands it has a slightly surreal aspect as well. Although it isn't used the same as other aspects of cinematography to convey feelings to the audience, it is a very strong way of doing so and helps build an obvious tension, which is why Burton uses it in the way I have said. In conclusion I think that Tim Burton uses very similar and effective techniques of cinematography in both Edward Scissorhands and Sleepy Hollow to communicate the gothic nature and narrative of the films to the audience. However there are some slight differences, such as Edward Scissorhands having some aspects reversed in a way that are not usually present in a gothic fantasy, such as the villain, Jim. I do think though that the way Tim Burton portraits both films is very effective, especially for the gothic fantasy genre. ?? ?? ?? ?? Ciaran Evans Media Studies 12/07/06 ...read more.