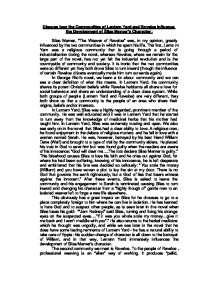 Discuss how the Communities of Lantern Yard and Raveloe influence the Development of Silas Marner's Character.

Discuss how the Communities of Lantern Yard and Raveloe influence the Development of Silas Marner's Character: Silas Marner, "The Weaver of Raveloe" was, in my opinion, greatly influenced by the two communities in which he spent his life. The first, Lantern Yarn was a religious community that is going through a period of industrialisation during the novel, whereas Raveloe, where we remain for the large part of the novel, has not yet felt the industrial revolution and is the countryside of community and society. It is ironic that the two communities were so different yet they both drove Silas to turn inward (though the influence of certain Raveloe citizens eventually made him turn outwards again). In George Eliot's novel, we learn a lot about community and we can see a clear definition of what this means. In Lantern Yard, the community shares its potent Christian beliefs while Raveloe habitants all share a love for social behaviour and share an understanding of a clear class system. While both groups of people (Lantern Yard and Raveloe) are very different, they both show us that a community is the people of an area who share their origins, beliefs and/or interests. In Lantern Yard, Silas was a highly regarded, prominent member of the community. He was well educated and it was in Lantern Yard that he started to turn away from the knowledge of medicinal herbs that his mother had taught him. In Lantern Yard, Silas was extremely trusting and open. We also see early on in the novel that Silas had a clear ability to love. ...read more.

When Silas first reports his loss, and blames Jem Rodney, he has been driven to further bitterness by members of the Raveloe community, yet he soon starts to receive social visits from others including Dolly Winthrop. This is purely down to the robbery- and the upper class community in the form of Dunsey Cass. Silas had now made a bridge with the Raveloe community, as while his relations with the villagers follow the same impartial logic as before, his impulse to turn to them for help in his trouble and his accusations of Jem have allowed him a small acceptance into the community. They see him as an innocent soul and in need for help. The sympathetic ears, good advice, welcome presents and soothing attentions all culminate in Dolly Winthrop's well-judged efforts to reach Silas by all means she feels may work on him. She brings cakes with their religious sanction in the traditionally pricked 'good letters': ""There's letters pricked on 'em," said Dolly "I can't read 'em myself...but they've got a good meaning, for they've the same as on the pulpit-cloth at church"." She also encourages the weaver to return to church. All these good means fail to reach him, and can sense that something is being conveyed by Eliot in Silas and Dolly's sometimes comical conversation about the difficulty of achieving any real communication between people who don't belong in the same community. This further emphasises the point that although Silas's character is being allowed to develop within the Raveloe community, and the Master himself is being gradually integrated into daily Raveloe life, he is still an outsider to the large part of society. ...read more.

Eliot uses Silas's visit to the old city to create strong contrasts between the two communities. This is obvious with the 'light/dark' imagery she uses. In the chapter following Silas's return to Lantern Yard, Eppie has her fairy-tale wedding to Aaron Winthrop. While Silas Marner I feel gives the reader a good insight into the society of the time and the influences the members of a community had on one another, there is still a fairy-take element to the story. This is most poignant in the dream wedding of Eppie and Aaron: "She seemed to be attired in pure white...like the dash of gold on a lily...the flowers shone with an answering gladness." This quote is only one example of the positive, light imagery that is used to create sharp contrasts with chapter twenty-one. Eliot also uses colours to create a more vivid image for the reader, one you can almost feel yourself being part of and while Lantern Yard is, to Eppie at least a "dark, ugly place" and "worse than the workhouse" Raveloe remains light, friendly and ""a pretty home"." In conclusion, Silas Marner's character was greatly influenced by the two communities in which he spent his life. Firstly, Lantern Yard, his original home, caused him to turn inward and forced him to enter into a downward spiral, something from which he was eventually lifted by the Raveloe community. While Raveloe did, at first allow him to carry on in isolation, the community eventually changed his character, and aided him in the path to self discovery as he subconsciously endeavoured to learn to trust again, learn to love again and how to be loved. ...read more.