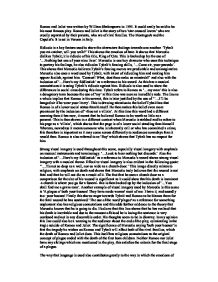 Romeo and Juliet was written by William Shakespeare in 1595. It could easily be said to be his most famous play. Romeo and Juliet is the story of two 'star crossed lovers' who are cruelly separated by their parents, who are of rival families. The Montague's and the Capulet's. It is set in Verona in Italy. Ridicule is a key feature used to show the characters feelings towards one another. 'Tybalt you rat-catcher, will you walk?' This shows the emotion of hate. It shows that Mercutio dislikes Tybalt; it is ridicule of his title, King of Cats. This is backed up by the use of '...Nothing but one of your nine lives'. Mercutio is one key character who uses this technique to portray his feelings, he also ridicules Tybalt's fencing skills, '...Come sir, your passado'. This shows that Mercutio believes Tybalt's fencing moves are predictable and unimaginative. Mercutio also uses a word used by Tybalt, with intent of ridiculing him and making him appear foolish, against him. 'Consort! What, dost thou make us minstrels?' and also with the inclusion of '...Here's my fiddlestick' as a reference to his sword. As this has a musical connotations it is using Tybalt's ridicule against him. ...read more.

'Away to heaven, respective lenity, and fire-eyed fury be my conduct now!' This shows that the scene is suddenly a lot more serious as Romeo has been holding back his emotions until this point even though Tybalt has been provoking him, when Tybalt kills Mercutio his rage culminates until he can no longer hold back even though he does not want to upset Juliet by engaging his 'kinsman' in combat. That Romeo immediately spouts a rhyming couplet after hearing of Mercutio's death could show that his thoughts, feelings and emotions are in a state of disarray as this is almost contradictory to the belief we have that the rhymes used by Shakespeare are synonymous with a light-hearted tone and certainly not with serious incidents such as this one. Mercutio also uses prose when the fatal wound is inflicted on him. '...A braggart... a villain, that fights by the book of arithmetic!' this shows a serious change of tone as Mercutio has until this point been portrayed as a comical, relaxed character who seems unphased by the tribulations faced by the other characters. 'I will not budge for no mans pleasure, I'. ...read more.

Both emotions are strong ones, he believes that hate cannot be without the feeling of love. That although they are polar opposites they have much in common and one can easily turn to the other in certain circumstances. This gives the audience an insight into Romeo's feelings about the feud between the two rival families and also how he believes it must have started., this is significant as little is given to the audience by way of an explanation as to why the feud began, this gives a vital clue. It shows that Romeo's belief is that it started because of the emotion of love, which turned to hate when something which is not elaborated on, occurred. It seems as if he feels he can relate to these feelings as he believes he is experiencing love first hand himself, that which is unreciprocated, which could also offer insight in to the reason for the feud. 'In sadness, cousin, I do love a woman.' In conclusion, the emotions of love and hate are effectively portrayed in Romeo and Juliet using a combination of stagecraft, language and visual imagery, centered primarily around the use of metaphors to provoke the emotions of the audience. ?? ?? ?? ?? ...read more.