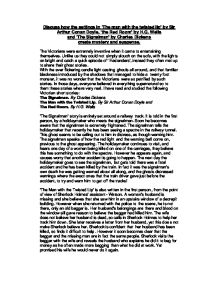 Discuss how the settings in 'The man with the twisted lip' by Sir Arthur Conan Doyle, 'the Red Room' by H.G. Wells and 'The Signalman' by Charles Dickens create mystery and suspense.

Discuss how the settings in 'The man with the twisted lip' by Sir Arthur Conan Doyle, 'the Red Room' by H.G. Wells and 'The Signalman' by Charles Dickens create mystery and suspense. The Victorians were extremely inventive when it came to entertaining themselves. Unlike us they could not simply slouch on the sofa, with the lights on bright and catch a quick episode of 'Eastenders', instead they often met up to share their ghost stories. With the ever flickering candle light casting ghouls all around, and that familiar blackness introduced by the shadows that managed to hide a twenty foot monster, it was no wonder that the Victorians were so petrified by such stories. In those days, everyone believed in everything supernatural so to them these stories where very real. I have read and studied the following Victorian short stories: The Signalman. By Charles Dickens The Man with the Twisted Lip. By Sir Arthur Conan Doyle and The Red Room. By H.G. Wells 'The Signalman' story is entirely set around a railway track. It is told in the first person, by a holidaymaker who meets the signalman. Soon he becomes aware that the signalman is extremely frightened. The signalman tells the holidaymaker that recently he has been seeing a spectre in the railway tunnel. This ghost seems to be calling out to him in distress, as though warning him. The signalman speaks of how the red light and the warning bell come on, previous to the ghost appearing. The holidaymaker continues to visit, and hears one day of a women being killed on one of the carriages, they believe this has something to do with the spectre. However he appears again, and causes worry that another accident is going to happen. The next day the holidaymaker goes to see the signalman, but gets told there was a fatal accident and he has been killed by the train. ...read more.

Also the imagery of oozing damp ground is not very pleasant, like the walk to hell. Here it is as though this is just the beginning of the subtle mentions of death, and the audience may find themselves pleading for the speaker to turn and go back, to save himself. In the 'Red Room' there is rich description used as the character is making his way towards the room. The walk that he takes to get there is obviously underground, it says: "The long, draughty subterranean passage was chilly and dusty." I feel that they have highlighted the fact that it is underground in order to make it feel more scary. I think that being under ground it gives the effect of having no escape. The fact that the passage is dusty shows that people have not been down there very often, this emphasises how ridiculous it is for him to be going there. The word chilly is often associated with being frightened - 'sent a chill down my spine', so I feel this word has been chosen for that reason. People will subconsciously feel on edge. This description does not give much away about the passage. All it has in effect said is that the passage is long, cold and dirty; the rest is left to the imagination. I think this is a very good way to add to the mystery. There is a heavy atmosphere throughout the 'Red Room'. This is made by the main characters imagination running wild. For example when he is on his way to the room it says: "a shadow came sweeping up after me, and one fled before me into the darkness overhead." This gives the impression that some sort of ghost or supernatural force is chasing him. It makes the feeling of the story very scary. We feel empathy for this man who is to enter the haunted room. ...read more.

The man with the twisted lip also uses opposites when in come to characters, this may be to help the audience understand others points of view at this time of social division. On the other hand, the red room uses characters whose social status is not clear. The red room seems to be the only story that uses it characters to create fear in the audience. They are not very pleasant looking characters and seem to be rather mysterious making the audience nervous about them. At the end of all of the stories it is clear what has been scaring, haunting or even fooling the main characters. This gives the audience chance to make predictions to the ending and have fun finding out what happened. I feel it can make the audience have a more entertaining time. However, I think it is more mysterious when some questions are left unanswered. 'The Red Room' seems to be the only one that leaves a certain amount of mystery at the end, as it is still fairly unclear what really happened. I think this works very well. Having read all of the stories, compared the different techniques used in each and studied the overall atmosphere each creates I feel that the most able at producing mystery and suspense is 'the Red Room'. I say this for many reasons. Firstly it makes good use of a variety of sentences, when something scary is happening the sentences are very short and this makes the audience left in further suspense. As I have mentioned, leaving it open ended also leaves the reader in mystery. H.G. Wells seems to have got a very good balance of description, with a mental picture easy to build up, yet space for personalisation to occur. The background story used is not in full detail, adding mystery in the past tense also. The characters are well developed and this helps the audience to believe and become fully involved in the story. I enjoyed all of the stories, yet for the above reasons feel 'the Red Room' works the best. ...read more.