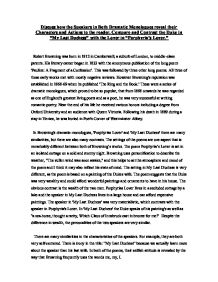 Discuss how the Speakers in Both Dramatic Monologues reveal their Characters and Actions to the reader. Compare and Contrast the Duke in &quot;My Last Duchess&quot; with the Lover in &quot;Porphyria's Lover.&quot;

Discuss how the Speakers in Both Dramatic Monologues reveal their Characters and Actions to the reader. Compare and Contrast the Duke in "My Last Duchess" with the Lover in "Porphyria's Lover." Robert Browning was born in 1812 in Camberwell, a suburb of London, to middle-class parents. His literary career began in 1833 with the anonymous publication of the long poem 'Pauline: A Fragment of a Confession'. This was followed by three other long poems. All three of these early works met with mostly negative reviews. However Browning's reputation was established in 1868-69 when he published 'The Ring and the Book.' These were a series of dramatic monologues, which proved to be so popular, that from 1868 onwards he was regarded as one of England's greatest living poets and as a poet, he was very successful at writing romantic poetry. Near the end of his life he received various honors including a degree from Oxford University and an audience with Queen Victoria. Following his death in 1889 during a stay in Venice, he was buried in Poet's Corner of Westminster Abbey. In Browning's dramatic monologues, 'Porphyrias Lover' and 'My Last Duchess' there are many similarities, but there are also many contrasts. The settings of the poems are one aspect that is remarkably different between both of Browning's works. ...read more.

He convinces himself that she didn't feel pain "No pain felt she; I am quite sure she felt no pain" he says this to himself as if to justify what he has done. It is quite chilling that after he has killed her he does not condemn himself or feel as though he has done anything wrong "as God has not said a word!" He now has the possession and control over her that he always wanted, "we sit together now, And all night long we have not stirred," The poem, My Last Duchess has a great likeness to Porphyria's Lover. We learn a great deal about the Duke's character by hearing how he thought and felt about his last Duchess. Through his speech, the reader can see how he is very jealous and controlling, which leads us to believe that he may have dishonorable qualities. The poem starts with the Duke describing the picture to the emissary. In the first few lines, we can already tell that the Duke is obsessed with power by his choice of words. He uses a lot of 'my' and 'I' which suggest that he is also very selfish. The Duke was very obsessive over his wife and wanted power and control over her: "I gave commands; Then all smiles stopped together." ...read more.

The speaker talks highly of Porphyria and it is evident that he loved her dearly, as he felt that she "shut the cold out and the storm" and "made the cottage warm." He talks about her in a very s****l way. She returns home dripping wet and removes her outdoor clothing and "made her smooth white shoulder bare" and her "yellow hair displaced." The way that the speaker describes her shows the reader how much he admired her, which is very different to how the Duke talked about his wife. After looking at the two poems, it is clear that the speakers have many similarities and differences. The main contrast was the social status of the speakers. The Duke was very wealthy, lived in a mansion and was of high social status, whereas Porphyria's lover was not particularly rich and lived in a small cottage. Some of their personality traits also differed. The Duke was more arrogant and full of pride and I think this was due to his wealth. The speaker in 'Porphyria's Lover' loved Porphyria a lot and spoke fondly of her, however the Duke was not always as kind about his wife, and often spoke negatively about her. They also had similar traits such as obsession, possessiveness and a need for control over people. The Duke was unable to "tame" and control his wife and the lover was unable to possess Porphyria and these common characteristics of the two speaker's lead to the death of their loved ones. ...read more.