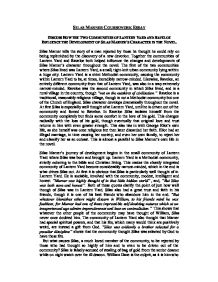 SILAS MARNER COURSEWORK ESSAY DISCUSS HOW THE TWO COMMUNITIES OF LANTERN YARD AND RAVELOE INFLUENCE THE DEVELOPMENT OF SILAS MARNER'S CHARACTER IN THE NOVEL. Silas Marner tells the story of a man rejected by those he thought he could rely on being replenished by the discovery of a new devotion. Together the communities of Lantern Yard and Raveloe both helped influence the changes and developments of Silas Marner's character throughout the novel. The first of the two communities where Silas lived was Lantern Yard, a small, tight-knit urban community lying within a huge city. Lantern Yard is a strict Methodist community, causing the community within Lantern Yard to be, at times, incredibly narrow-minded. Likewise, Raveloe, an entirely different community from that of Lantern Yard, was also in a way extremely narrow-minded. Raveloe was the second community in which Silas lived, and is a rural village in the country, though "not on the outskirts of civilisation." Raveloe is a traditional, reasonably religious village, though is not a Methodist community but one of the Church of England. Silas character develops dramatically throughout the novel. At first Silas is especially well thought of at Lantern Yard, until he is driven out of the community and forced to Raveloe. In Raveloe Silas isolates himself from the community completely but finds some comfort in the love of his gold. This changes radically with the loss of his gold, though eventually that original love and trust returns in him with even greater strength. ...read more.

Silas does have one thing to cling on to through his time in Raveloe - his gold. This is a great contrast between the way Silas lives in the village, isolated, and his love for his gold. It is almost as if the gold is a replacement for everything that he left behind in Lantern Yard, so much that he is obsessive about it, "He handled them, he counted them, till their form and colour were like the satisfaction of a thirst to him," showing that his gold is virtually a craving to him. This makes it all the more devastating to him when he finds his gold has been stolen. However, there is some consolation for his loss as this is the first time that Silas is forced to integrate with the community. When Silas first discovers his gold is missing, his immediate thoughts place the blame on Jem Rodney. Silas guesses Jem will be at the Rainbow pub, where most of the lower class villagers usually are. Once there the villagers are initially extremely surprised to see Silas there, but once they listen to what has happened they sympathise with him and are actually interested in finding out whoever has stolen the gold. This is an enormous step for Silas into being accepted into the society, as is shown in the quote, "And yet he was not utterly forsaken in his trouble. The repulsion Marner had always created in his neighbours was partly dissipated by the new light in which this misfortune had shown him." ...read more.

me and I've come to love her as myself, I've had enough light to trusten by; and now she says she'll never leave me, I think I shall trusten till I die." Silas is in no way a heroic character. He is not notably intelligent or courageous or unselfish. Silas changes greatly during the course of the book, yet part of him always remains "the same Silas Marner who had once loved his fellow with tender love and trusted in an unseen goodness." That original love and trust seemed crushed by the troubles that happen to him, but they return with even greater strength. The changes in Silas' character are never arbitrary. They develop unsurprisingly from his past. The betrayal by William Dane costs Silas his faith in men, and the drawing of the lots seizes his faith in God. The loss of his gold again costs Silas his faith in men, yet he believes that Eppie is sent for his salvation, and through Eppie's influence he finds new faith in the goodness of other men and gains maturity and inner strength. George Eliot includes several morals woven into the novel, the most obvious being that of divine intervention. This seems to arise repeatedly during the novel, for example when Dunstan steals Silas' gold and in the process falls into a pit or when Eppie is explicitly put forward as a substitute for Silas' treasure. Maybe these are just unlikely coincidences, but Eliot has definitely tried to intertwine some message of deciding your own fate into the story. ?? ?? ?? ?? ...read more.