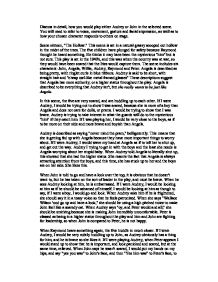 Discuss in detail, how you would play either Audrey or John in the selected scene. You will need to refer to voice, movement, gesture and facial expression, as well as to how your chosen character responds to others on stage.

Discuss in detail, how you would play either Audrey or John in the selected scene. You will need to refer to voice, movement, gesture and facial expression, as well as to how your chosen character responds to others on stage. Scene sixteen, "The Hollow." This scene is set in a natural grassy scooped out hollow in the midst of the trees. The five children have plunged for safety because Raymond thought he heard something. He thinks it may have been the mysterious "him" but is not sure. This play is set in the 1940's, and this was when the country was at war, so they would have been scared that the Ities would capture them. The scene includes six characters: John, Angela, Willie, Audrey, Raymond and Peter. Angela is described as being pretty, with ringlet curls in blue ribbons. Audrey is said to be short, with straight hair and "cheap owl-like metal framed glasses" These descriptions suggest that Angela has more authority, or a higher status throughout the play. Angela is described to be everything that Audrey isn't, but she really wants to be just like Angela. ...read more.

When Audrey asks him if he is frightened, she should say it in a teasy voice so that he feels patronized. When she says "Wallace Wilson 'ood go up and have a look," she should be using a high pitched voice to make John feel like a scaredy cat. When Audrey says "oy, and Peter would and all," she should be smirking because she is making John incredibly uncomfortable. Peter is classed as being in a higher status throughout the play and him and John are fighting for leadership, so when John is compared to Peter, he is not happy. When Raymond hears something again, the five huddle in much closer. If I were Audrey, I would be very subtly huddling up to John, as Audrey obviously has a thing for him, and he is brave so she likes it. If I were playing Audrey, when Peter appears I would stand up to show that he is important, and look panicked and scared, but at the same time, relieved. When John says he wasn't scared, I would put my hands on my hips, and say "yes you was" to John's face, and then "Yes him was" to Peter's face, to try and make him believe that John was scared. ...read more.

When Audrey says "but what about her bloody doll?" I would direct that at Peter, and this would show that again, Audrey is trying to be more boyish. When she is told to stop cussing by Angela, I would feel intimidated and glare at Angela, so that the boys could see I was trying to win back the high status. Audrey then disagrees with Angela again, when Angela tells the boys that they can't leave them. Audrey says that somebody has to go. If I were Audrey, I would be looking at Peter and John, because they are the two bravest there, and it would show her admiration for them. When the boys go, I think that Audrey should look at them to show admiration, but also disbelief that they are going. Deep puppy eyes would show that she likes them both. When the boys are gone, the four children huddle together more, with Raymond and Willie on the outside, and Audrey and Angela in the middle with their backs turned on one another to show that they are not happy. Audrey should have her arms crossed, as a sign of attitude. ...read more.