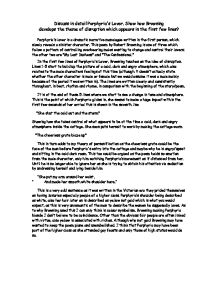 Discuss in detail Porphyria's Lover. Show how Browning develops the theme of disruption which appears in the first few lines?

Discuss in detail Porphyria's Lover. Show how Browning develops the theme of disruption which appears in the first few lines? Porphyria's lover is a dramatic narrative monologue written in the first person, which slowly reveals a sinister character. This poem by Robert Browning is one of three which follow a pattern of controlling overbearing males wanting to change and control their lovers; the other two are "My Last Duchess" and "The Confessional." In the first few lines of Porphyria's Lover, Browning touches on the idea of disruption. Lines 1-5 start to build up the picture of a cold, dark and angry atmosphere, which also relates to the male characters feelings at this time (although it doesn't actually state whether the other character is male or female but we would assume it was a male mainly because of the period it was written in). The lines are written clearly and consistently throughout, in beat, rhythm and rhyme, in comparison with the beginning of the story/poem. It is at the end of these 5 lines where we start to see a change in tone and atmosphere. ...read more.

Again lines 36-40 change the mood again. Until this point the poem had been very cold and full of anger to warmth and watchfulness. But now it slowly changes "That moment she was mine, mine, fair, . Perfectly pure and good: I found . A thing to do, and all her hair . In one long yellow string I wound . Three times her little throat around" This to is a strange use of language as it slowly tells you what is happening in such a way you don't even realise until he has done it. However what I find that adds to the imagery of this is the transition between the characters they seem to change, become the others status. The man becomes in control as if trying to preserve what they had. Repetition Mine, Mine he seems to assure himself that she wanted to be his and his alone, and if he couldn't have her that no-one was going to be able to. Although I think it was Porphyria's wish to stay with her lover I do not believe she wanted to in death, but to be surrounded by the love which he can/will only give her when she is his and his alone. ...read more.

I think this may be the case as he is trying hard to find ways to justify his actions. In conclusion to my essay I have discussed Porphyria's lover and believe in some ways I have shown how Robert Browning develops the theme of disruption. I think that the first few lines do relate very much to the feelings of the male character and that this sets the stage for the rest of the poem, as it gives tone to the story and slightly explains the outline of the poem. Also I think this poem maybe a reflection on the period more than anything else as it was a time of repression against women, which adds more depth to the poets theme of the poem which you could ask the question why write a poem that touches on such a strong note unless you cared about the issues surrounding it. So to conclude this essay, the poem is full of disruption from the storm outside, the stage of seduction and finally the murder but it's not all clear to the eye unless you understand the time in which it was written and the person who wrote it. ...read more.