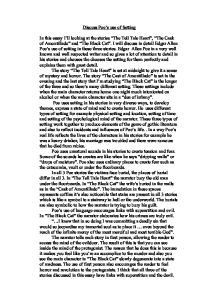 Discuss Poe's use of Setting.

Discuss Poe's use of Setting In this essay I'll looking at the stories "The Tell Tale Heart", "The Cask of Amontillado" and "The Black Cat". I will discuss in detail Edgar Allen Poe's use of setting in these three stories. Edgar Allen Poe in a very well known and well respected writer and so gives a lot of attention to detail in his stories and chooses the chooses the setting for them perfectly and explains them with great detail. The story "The Tell Tale Heart" is set at midnight to give it a sense of mystery and horror. The story "The Cast of Amontillado" is set in the evening and the last story that I'm studying "The Black Cat" is the longer of the three and so there's many different setting. These settings include when the main character returns home one night much intoxicated on alcohol or when the main character sits in a "den of infamy". ...read more.

In "The Tell Tale Heart" the narrator bury the old man under the floorboards. In "The Black Cat" the wife's buried in the walls as in the "Cask of Amontillado". The immolation in these spaces represents coffins it's also noticeable that stairs are present in all 3 stories which is like a symbol to a stairway to h**l or the underworld. The burials are also symbolic to how the narrator is trying to bury his guilt. Poe's use of language encourages links with superstition and evil. In "The Black Cat" the narrator elaborates how his crimes are truly evil. "...I knew that in so doing I was committing a deadly sin that would so jeopardise my immortal soul as to place it ... even beyond the reach of the infinite mercy of the most merciful and most terrible God". The narrator tells each story in first person, allowing the reader to access the mind of the evildoer. ...read more.

The title of the story "The black Cat" is related to witches. People believe that someone who posses the evil eye can cause bad happenings and illness, eyes painted on Mediterranean boats reflect this. The evil eye goes against the idea of eyes and vision and is directly mentioned in "The Tell Tale Eye" and blamed for the actions of the murder. He describes the man of having the eye of a vulture and he describes it as being a pale blue eye with a film over it. The idea of retribution differs in the three stories as in two of the stories, the protagonists are arrested. However in the other story the narrator gets away with his crime. He is smug when he buries Fortunado and parts with the comment "In Pace reguisciat" which means 'Rest in Peace'. Although he said Rest in Peace he himself will not because he will be judged by God and face h**l. Poe uses setting effectively to create tension and horror in his stories. He makes obvious uses of the gothic genre to bring the feeling of fear alive. ...read more.