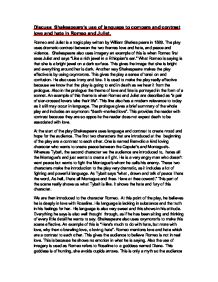 Discuss Shakespeares use of language to compare and contrast love and hate in Romeo and Juliet.

Discuss Shakespeare's use of language to compare and contrast love and hate in Romeo and Juliet. Romeo and Juliet is a tragic play written by William Shakespeare in 1589. The play uses dramatic contrast between the two themes love and hate, and peace and violence. Shakespeare also uses imagery an example of this is when Romeo first sees Juliet and says "Like a rich jewel in a Ethiopian's ear." What Romeo is saying is that she is a bright jewel on a dark surface. This gives the image that she is bright and everything around her is dark. Another way Shakespeare makes the play effective is by using oxymorons. This gives the play a sense of tension and confusion. He also uses irony and fate. It is used to make the play really effective because we know that the play is going to end in death as we hear it from the prologue. Also in the prologue the theme of love and fate is portrayed in the form of a sonnet. An example of this theme is when Romeo and Juliet are described as "a pair of star-crossed lovers take their life". This line also has a modern relevance to today as it still may occur in language. ...read more.

'Tis but thy name that is my enemy, Thou art thyself, though not a Montague." Juliet is saying "why are you Romeo", meaning why is he a Montague and not a Capulet as it would be acceptable for Juliet to love Romeo. She asks Romeo to deny being a Montague and giving up his family name but if he does not want to then she will. Her enemy is not Romeo himself, but his name therefore if he leaves his name then he will no longer be her enemy. Her feelings for Romeo are so strong that she is willing to do anything to be with him. When Romeo finally speaks, Juliet tells Remo that if the "kinsmen" find him, they will kill him. However Romeo replies by saying "for stony limits cannot hold love out, and what love can do, dares love attempt. Therefore thy kinsmen are no stop to me." Romeo is saying that If they found him they would kill him and therefore he would have been killed for loving someone and wanting to see them. Romeo is being polite by saying that nothing can keep him from being with her, not even her relatives. He is trying to sound brave for Juliet and his love for her which is more playful and happier than his love for Rosaline which at times was quite depressing. ...read more.

This is often showed in terms of night and day imagery. This contrast has not given a particular metaphoric meaning. Light is not always good and dark is not always evil. On the other hand, light and dark are generally used to hint at opposed alternatives. This is shown when the early morning hours after the lovers' only night together. Romeo is forced to leave for banishment in the morning, and Juliet not want him to leave her room, both try to pretend it is still night and that the light is actually darkness: "more light and light more dark and dark our woes." When this scene occurs we can see that hate is overcome by love and also that the private part of your life will always collide with the public part of your life. Even though the story was written many years ago, people can still relate to it. It is still relevant to audiences today because people can still really hate each other; people still fall deeply in love, as did Romeo and Juliet. Some families even have major feuds which lead to killings or banishments of daughters or sons. Shakespeare's Romeo and Juliet shows us that love can fix any hatred in our world if you just let it happen. Also he has shown us that love is stronger by making a dramatic conclusion of killing both the lovers which brings both the families together. ...read more.