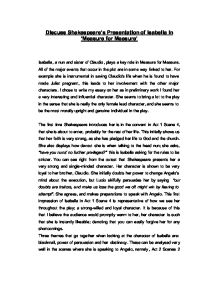 Discuss Shakespeare's Presentation of Isabella in 'Measure for Measure'.

Discuss Shakespeare's Presentation of Isabella in 'Measure for Measure' Isabella, a nun and sister of Claudio, plays a key role in Measure for Measure. All of the major events that occur in the plot are in some way linked to her. For example she is instrumental in saving Claudio's life when he is found to have made Juliet pregnant, this leads to her involvement with the other major characters. I chose to write my essay on her as in preliminary work I found her a very interesting and influential character. She seems to bring a lot to the play in the sense that she is really the only female lead character, and she seems to be the most morally upright and genuine individual in the play. The first time Shakespeare introduces her is in the convent in Act 1 Scene 4, that she is about to enter, probably for the rest of her life. This initially shows us that her faith is very strong, as she has pledged her life to God and the church. She also displays how devout she is when talking to the head nun; she asks, "have you nuns' no further privileges?" this is Isabella asking for the rules to be stricter. You can see right from the outset that Shakespeare presents her a very strong and single-minded character. Her character is shown to be very loyal to her brother, Claudio. She initially doubts her power to change Angelo's mind about the execution, but Lucio skilfully persuades her by saying "our doubts are traitors, and make us lose the good we oft might win by fearing to attempt". She agrees, and makes preparations to speak with Angelo. This first impression of Isabella in Act 1 Scene 4 is representative of how we see her throughout the play; a strong-willed and loyal character. It is because of this that I believe the audience would promptly warm to her, her character is such that she is instantly likeable; denoting that you can easily forgive her for any shortcomings. ...read more.

As it is reasonably clear what Angelo is to suggest, it will be interesting for them to see what her actual reaction will be. Whether she will stick to her morals as proposed, or be willing to do such a thing to save Claudio. I think that the audience's decision at this point would be undecided; they have seen how devout she is. However she has done a lot to attempt to save him; so the family bond may come first. Shakespeare deliberately creates this remarkably difficult choice, to make the audience empathise with Isabella and condemn Angelo. Angelo then says that her not attempting to save Claudio is a sin in itself, Isabella reinforces the fact that her salvation is of the utmost importance. "Lawful mercy is nothing kin to foul redemption." She argues this point for approximately a hundred lines, until she finally realises Angelo's true intentions. "He shall not (die), Isabel, if you give me love." This disgusts Isabella; she accuses him of hypocrisy and threatens to expose him to the city. "Sign me a present pardon for my brother, or...I'll tell the world aloud what a man thou art." This shows her incredible strength of character; she is freely threatening a man in a powerful position, which is not typical of the woman of that day. Angelo leaves her with a resounding speech on how his esteemed reputation will mean that no-one would believe her, "my false o'erweighs your true." Along with the fact that if she does not succumb to his desire then "he (Claudio) must not only die the death, but thy unkindness shall his death draw out to lingering sufferance." Soliloquies play a vital part in the analysis of any character; they give you an insight into what kind of people the playwright intended them to be. Isabella has only one, at the very end of Act 2 Scene 4. ...read more.

He tells her that Claudio has been released from the world. I believe that his other reason for doing this is to make her hatred towards Angelo grow, meaning that she will argue her case more forcibly in the final chapter. The audience would no doubt feel that this is very unfair to Isabella, as she is the innocent victim in the Duke's scheme. She is quite simply being used. Shakespeare's reasons for doing this are possibly to show that everyone is prone to being influenced and treated unfairly by people in power, and that this can happen to even the most strong-minded people. Shakespeare presents Isabella as a very strong female character, her morally upright nature and virtuous disposition make it easy to sympathise and empathise with her. The fact that her battles to save her brother are so fruitless and her innocence and piety are exploited by Angelo evokes yet more empathy from the audience. I would argue that she is the most fascinating character in 'Measure for Measure'. All her decisions made are torn between faith and family, the most difficult of these being the death of Claudio versus her own eternal salvation. It is the emotional turmoil therein that is so intriguing about her character, this 'extra dimension' to her fabricated personality that makes her seem a lot more human than other characters. In Isabella, Shakespeare has created a latter-day feminist. A woman who is not bound by the restraints of a male dominated society, but freely expresses her opinions and argues them forcibly. However, despite the strength of her character, most men in the play attempt to manipulate her to their own means. Her ultimate acceptance or rejection of the Duke is a clever device used by Shakespeare to leave things 'open'. This lets us, the audience, make up our own mind as to which path she will choose, based upon our interpretation of her character throughout the play. The union of all these elements create a picture Isabella, perhaps one of the most genuine and interesting characters Shakespeare created. ...read more.