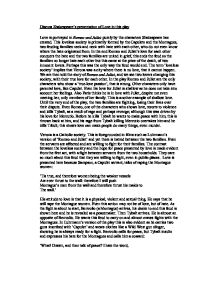 Discuss Shakespeare's presentation of Love his play Romeo and Juliet

Discuss Shakespeare's presentation of Love in this play Love is portrayed in Romeo and Juliet purely by the characters Shakespeare has created. This loveless society is primarily formed by the Capulets and the Montagues, two feuding families neck and neck with hate with each other, who do not even know where the hate originated from. In the end Romeo and Juliet's love for each other conquers the hate and the two families are united in grief, this ends the feud so the families no longer hate each other but this came at the price of the death, of two innocent lovers. Perhaps this was the only way the feud would end. The term 'loveless society' implies that Verona was a city where there is no love, that it cannot happen. We are then told the story of Romeo and Juliet, and we see two lovers changing this society, with their true love for each other. In the play Romeo and Juliet are the only characters who show a 'true-love passion', that is strong. Other characters only have parental love, like Capulet. Even his love for Juliet is shallow as he does not take into account her feelings. Also Paris thinks he is in love with Juliet, despite not even meeting her, only members of her family. This is another example of shallow love. Until the very end of the play, the two families are fighting, losing their lives over their dispute. Even Romeo, one of the characters who shows love, resorts to violence and kills Tybalt, as a result of rage and perhaps revenge; although this was driven by his love for Mercutio. Before he kills Tybalt he wants to make peace with him, this is thrown back at him, and his rage from Tybalt killing Mercutio overtakes him and he kills Tibult; this shows love can make people do many things, even murder. ...read more.

He may have said this because he feels that she needs to be mature and marry when she is ready to. But later we find out that it was mainly so that when she is older she will be more attractive physically, and when he says 'ripe to be a bride', he is saying that we eat a fruit when it is older and looks, or in Juliet's case when she is older and more attractive he will use her, to marry her. But then Capulet soon realises that the County Paris is rich and powerful and he would benefit economically from the wedding. He then disregards his previous idea and the wedding goes ahead. Later in the play we see Capulet's true selfishness when Juliet refuses to marry Paris. He erupts into a rage, insults Juliet and says: 'To go with Paris to Saint Peter's church, Or I will drag thee on a hurdle thither. Out, you green-sickness carrion! Out, you baggage! You tallow-face.' Even after Juliet then goes on her knees and begs her father is insulted even more and curse her, telling her if she doesn't marry she should never look at him again: 'I tell thee what: get thee to church a'Thursday, or never after look me in the face. Speak not, reply not, do not answer me! ... But now I see this one is one too much, and that we have a curse in having her. Out on her, hilding!' He insults her deeply and says that it was a mistake having her. Even after Juliet begs on her knees he is insulted even more and resorts to violence. He goes for Juliet but Lady Capulet steps in the way and Juliet is forced to hide behind her, almost for her life. It seems now that there is almost no love between Capulet and Juliet now, only hate; although Juliet may still see a little love for her Father. ...read more.

'The doors of breath, seal with a righteous kiss A dateless bargain to engrossing death! ... Thy drugs are quick. Thus with a kiss I die.' Here he expresses that with one last kiss he has rid the sins of both families and that they both be reunited; but at the cost of his life. Juliet awakens to find Romeo dead, she takes her own life to be with Romeo, even, in death they be together. In Romeo and Juliet love is portrayed as holy and pure. This is illustrated many times throughout the play. Even when Romeo and Juliet first meet they refer to each other as 'saints' and 'pilgrims', and also in other parts of the play. They symbolise a prayer with a kiss, which shows the holiness of their love. This is very Christian, and relates to Christ himself, who sacrifices his life for beliefs, as Romeo and Juliet did with their beliefs about love, in Verona. Romeo and Juliet's love in the loveless society has completely changed it, the hatred that once was the only thing people had talk about, has now been overcame with their love and restored Verona into a city with love. There were no motives behind Romeo and Juliet's love at least as there were with the hatred between the two families, that had gone on for so long no one even knew where it started. The hatred only led to suffering. Love in this play also proves to be powerful, the saying 'Love conquers all' certainly applies here as the power of love conquered what seemed an endless hate. The sacrifice Romeo and Juliet made also seems religious and also shows the purity and holiness in their love. So the love between Romeo and Juliet was enough to purge the sins of the Capulets and the Montague's and the people of Verona; love certainly conquers all. ...read more.