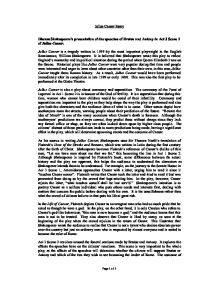 Julius Caesar Essay Discuss Shakespeare's presentation of the speeches of Brutus and Antony in Act 3 Scene 2 of Julius Caesar. Julius Caesar is a tragedy written in 1599 by the most important playwright in the English Renaissance, William Shakespeare. It is believed that Shakespeare wrote this play to reflect England's monarchy and its political situation during the period when Queen Elizabeth I was on the throne. Historical plays like Julius Caesar were very popular during that time and people were interested and eager to learn about other countries other than their own, in this case, Julius Caesar taught them Roman history. As a result, Julius Caesar would have been performed immediately after its completion in late 1599 or early 1600. This was also the first play to be performed at the Globe Theatre. Julius Caesar is also a play about ceremony and superstition. The ceremony of the Feast of Lupercal in Act 1 Scene 2 is in honour of the God of fertility. It is a superstition that during this time, women who cannot bear children would be cured of their infertility. Ceremony and superstition are important to the play as they help shape the way the play is performed and also give both the characters and the audience ideas of what is to come. Other scenes depict how soothsayers roam the streets, warning people about their prediction of the future. "Beware the ides of March" is one of the many occasions when Caesar's death is foreseen. Although the soothsayers' predictions are always correct, they predict these without charge since they lack any formal office or shop, so they are often looked down upon by higher class people. The citizens' distrust of these predictions leads to more predictions being made, having a significant effect in the play, which will determine upcoming events and the outcome of Caesar. As his source in writing Julius Caesar, Shakespeare uses Sir Thomas North's translation of Plutarch's Lives of the Greeks and Romans, which was written in Latin during the first century after the birth of Christ. ...read more.

Brutus goes on to say that "as Caesar loved me, I weep for him," demonstrating that he is moved by Caesar's love and cannot wish for anything more. "As he was fortunate, I rejoice at it," showing that he is happy for Caesar and not jealous of him. "As he was valiant, I honour him," which displays his admiration for Caesar, who he seems to look up to. But "as he was ambitious, I slew him." Once again, Brutus shows the love for his country as he thinks that Caesar's great ambition is not in Rome's best interest, so the only solution is to kill him. This type of phrases is called a parallelism. Shakespeare uses parallelisms because the similarity in the syntactical structure of these phrases has a powerful effect on the citizens, making them stay on their minds. There are three more examples of rhetorical questions, which in this case, can also be identified as anaphora, "who is here so..." each of them followed by a repetition of "if any, speak, for him have I offended". Shakespeare's aim is to show the citizens that their opinions really matter to Brutus, but the stress upon the line gets greater and greater at each repetition so the crowd dares not to admit if Brutus has insulted them. The use of assonance, "base" and "bondman", "rude" and "Roman" and, "vile" and "love" gives a more dramatic effect on the questions as these words stand out very clearly. Shakespeare finishes the speech with a "pause for a reply," this allows the citizens to respond to the rhetorical questions, making them believe that Brutus really does care about them and their opinions. The crowd could only reply "none, Brutus, none" because they are satisfied with what Brutus has said and moreover, they agree with him. Shakespeare portrays Brutus as an honest man, who is loyal to his own country and truly believes that by killing Caesar, along with his ambition, will benefit Rome. ...read more.

By this, Shakespeare wants the audience to realise that the crowd's reactions are not totally unprovoked, he wants the audience to show sympathy for Brutus and maybe, consider him as the true hero of the play, who we will later see die the noblest death. Shakespeare has created Antony's speech in a way so as to allow the audience to come to the conclusion that he is attempting to make, without being as direct as Brutus, who is too honest and na�ve. Antony immediately gains the crowd's attention by entering the scene carrying Caesar's corpse while Brutus has to struggle to get their attention. Although Brutus has failed in winning over the citizens, Shakespeare has provided Antony with props such as Caesar's wounded body and his will throughout his oration in order to emphasize certain points. Therefore, I don't think the crowd would have acted they way they have if he didn't use any props to kindle their emotions. Overall, I think Act 3 Scene 2 is the most important part of the play. The citizens are fickle; they can be led in any direction and their minds and opinions altered in a split-second. They just follow what appears right at the moment and Shakespeare has illustrated that the plebeians have a powerful influence on the play as a whole, the civil war could not have started without the support of these people. In my opinion, I think Brutus is very noble but deluded, he should not have left the scene after his own speech, letting Antony gain control over the whole situation. I sympathize with Brutus for he truly believes that by killing Caesar, Rome would be a better place. On the other hand, Antony should have realised Brutus's weaknesses that he is easily deceived, for example, by Cassius, and should have believed him that he genuinely felt that what he did is for the good of Rome. ?? ?? ?? ?? Page 1 of 5 ...read more.