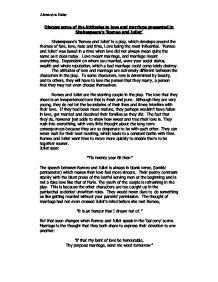 Discuss some of the Attitudes to love and marriage presented in Shakespeare's 'Romeo and Juliet'.

Discuss some of the Attitudes to love and marriage presented in Shakespeare's 'Romeo and Juliet' Shakespeare's 'Romeo and Juliet' is a play, which develops around the themes of fate, love, hate and time, Love being the most influential. 'Romeo and Juliet' was based in a time when love did not always mean quite the same as it does today. Love meant marriage, and marriage meant everything. Dependent on whom you married, were your social status, wealth and whole reputation, which a bad marriage could completely destroy. The attitudes of love and marriage are extremely different between the characters in the play. To some characters, love is determined by beauty, and to others, they will have to love the person that they marry, a person that they may not even choose themselves. Romeo and Juliet are the starring couple in the play. The love that they share is an inexperienced love that is fresh and pure. Although they are very young, they do not let the boundaries of their lives and times interfere with their love. If they had been more mature, they perhaps wouldn't have fallen in love, got married and deceived their families as they did. The fact that they do, however just adds to show how sweet and true their love is. They rush into everything, with very little thought about the long-term consequences because they are so desperate to be with each other. ...read more.

"So shall you share all that he doth possess, By having him, making yourself no less." She herself married Capulet when she was roughly Juliet's age and she most probably married Capulet for social status, as there is never any feeling of love or respect evident between them. This is quite unlike the Montagues; who seem to have set an excellent example of love for Romeo. Montague is genuinely distraught when Lady Montague dies because she cannot stand Romeo being banished and away from her. At the beginning of Romeo and Juliet, Capulet, like Montague seems sincere and that he genuinely loves and respects his daughter: "And too soon marred are those so early made... ... My will to her consent is but a part;" However, he goes behind Juliet's back and arranges for her to marry Paris, a man who she has barely even met. He tells Paris: "I think she will be ruled In all respects by me; nay more, I doubt it not." Capulet has not even asked Juliet about the wedding at this point, and so when she refuses, gets enraged. He is not used to his daughter not being as she used to be, subservient and obedient to him, therefore, he threatens to kick her out of the house and leave her for dead: "And you be not, hang, beg, starve, die in the streets;" He does this because of the patriarchal society that they lived in. ...read more.

I am the drudge, and toil in your delight; Despite the s****l coarseness, the hatred between the two families and the deceit, there is a clear, underlying moral. Pure love conquers all. Shakespeare makes this apparent by using different types of language with each type of love. From the first time that Romeo and Juliet meet, it is obvious that they are in true love, because they speak to each other in sonnets when they first meet, and always speak to each other in verse, often with rhyming couplets. Their love feels very elevated. When Paris speaks to Juliet, it does not seem like love, it seems insincere because Paris and Juliet speak in normal verse. He talks of owning Juliet: "Thy face is mine, and thou hast slandered it." 'Romeo and Juliet' is a play full of comparisons; love and hate, Capulet and Montague, sadness and happiness. The problems that the young couple face are due to marriage being seen as social standing, with your reputation depending on it. As the opposing families would not have allowed their children to marry, Romeo and Juliet's devotion to is shown by secretly rebelling against their parents' marital wishes. Such rebellion would never have been thought acceptable and had the couple stayed alive, both their reputations would have been destroyed by the deceit to their families. The whole play revolves around these themes and comparisons, but through love, the sadness and hatred is destroyed. Romeo and Juliet's love conquered all. Alexandra Halse ...read more.