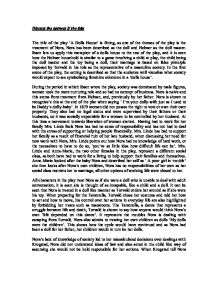 Discuss the aptness if the title 'A Dolls House'.

Discuss the aptness if the title The title of the play 'A Dolls House' is fitting, as one of the themes of the play is the treatment of Nora, Nora has been described as the doll and Helmer as the doll master. Ibsen lets us apply this metaphor of a dolls house to the rest of the play, and it is seen how the Helmer household is similar to a game involving a child at play, the child being the doll master and the toy being a doll, their marriage is based on false principle imposed by Torvald in his role as the representative of a masculine society. In the first scene of the play, the setting is described so that the audience will visualise what society would expect to see symbolising feminine existence in a 'dolls house'. During the period in which Ibsen wrote the play, society was dominated by male figures, women took the more nurturing role and so had no concept of business. ...read more.

All characters in the play treat Nora as if she were a doll who is unable to deal with adult conversation, it is seen she is thought of as incapable, like a child and a doll. It can be seen that Nora is treated in a doll like manner as Torvald orders her around as if she were his toy. When preparing for the Tarantella, Torvald chose her costume and told her how to act and how to move, his control over her actions in everyday life are also highlighted by forbidding her treats such as macaroons. The Tarantella, a dance that represents a struggle between life and death, Torvald is shown to say how anyone would think Nora's own 'life depended on this dance'. It represents the troubles Nora is dealing with escaping from Torvald. Nora also admits to treating her own children as dolls 'My dolls were the children'. ...read more.

Nora is seen as playing a role, acting up to her husband as the doll wife, Torvald to is playing a role as the powerful husband, the doll master. This does not mean the doll master is in control. In the opening scenes of the play Torvald takes on a controlling tone, conventional to the 'head of house' image that the male was presented with in that society, however it is Nora who gets her own way on issues such as spending money and receiving more and eating the macaroons. It may even be suggested that Torvald knows about this as a role in their relationship is for Torvald to set rules, which she will disobey. Torvald is highly concerned with the opinions of society and is not independent in his thought, this situation suits him but does make him easy to manipulate. As long as Nora plays by the rules of society she will be able to convince Torvald to give her anything she needs. This could make Torvald the doll of society. ...read more.