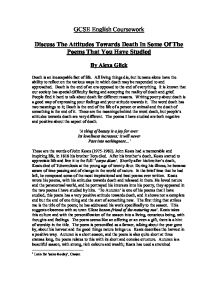 Discuss The Attitudes Towards Death In Some Of The Poems That You Have Studied.

GCSE English Coursework Discuss The Attitudes Towards Death In Some Of The Poems That You Have Studied By Alexa Glick Death is an inescapable fact of life. All living things die, but humans alone have the ability to reflect on the various ways in which death may be responded to and approached. Death is the end of an era opposed to the end of everything. It is known that our society has special difficulty facing and accepting the reality of death and grief. People find it hard to talk about death for different reasons. Writing poetry about death is a good way of expressing your feelings and your attitude towards it. The word death has two meanings to it; Death is the end of the life of a person or animal and the death of something is the end of it. These are the meanings behind the word death, but people's attitudes towards death are very different. The poems I have studied are both negative and positive about the aspect of death. 'A thing of beauty is a joy for ever: Its loveliness increases; it will never Pass into nothingness...' These are the words of John Keats (1975-1982). John Keats had a memorable and inspiring life, in 1818 his brother Tom died. After his brother's death, Keats started to appreciate life and live it to the full '1carpe diam'. Shortly after his brother's death, Keats died of Tuberculosis at the young age of twenty-four. ...read more.

Keats is expressing his feelings of life and death. His moral in these lines, is that we need to appreciate everything because every stage of life, just like every season has its own uniqueness, every stage of life has its charm and you should enjoy all your hard work. Not all Keats views on death were positive, he thought quite negatively as well, as shown in the next poem I studied 'La Belle Dans Sans Merci'. Keats major works do not deal with religion, ethnics, morals etc. but about sensations and experiencing the richness of life. In this poem, Keats is focusing on how experiencing beauty gives meaning and value to life. In 'La Belle Dame Sans Merci', Keats seems to be telling the reader about something that may have happened or may happen someday, even to you. You discover something you really like, but something you're not sure about, but it is the best thing you've ever experienced. You are bedazzled by it; you give in to everything and let it amaze you. But all of a sudden the desire is gone, just like life, the experience has let you down and you are regretting ever being so interested in it. In the poem, Keats is letting the reader decide whether the knight's experience was really worth it, or whether like life it was something to regret. Keats records no response to the dying knight. ...read more.

'Porphyria worshipped me'. The lover believes he is of a higher class than her because you only love someone of a higher class just like 'The Last Duchess', and the Duke being of a higher class to the Duchess and she chooses to 'stoop'. The relationships between the each of the lovers in the poems are very different; Porphyria and her lover are very close and affectionate while the Duke and the Duchess are very cold and distant. Both poems are about keeping a reminder of the victim close by e.g. the painting and on his shoulder. The two poems are very similar, but the difference is in the language, in 'Porphyrias Lover', the language is trying to make you feel sorry for the lover. However in 'The Last Duchess' the language is trying to persuade you that the Duke did the wrong thing killing the Duchess, this is a change of attitude towards death. Both poems contain themes of jealousy, power, obsession, love and most importantly death, but on a very different scale to Keats poems. In conclusion, after discussing the attitudes towards death in the some of the poems I have studied, it is clear that everybody has a different view on death, whether it is good or bad. Keats has a mixed view on death but overall had learnt the life was an experience and one to remember, Browning thought badly of death, and had an opposite view on it. But nonetheless death is inevitable; it happens to all of us, it should not be a threat just a fact of life. 1 Latin for 'seize the day', Caesar. ...read more.