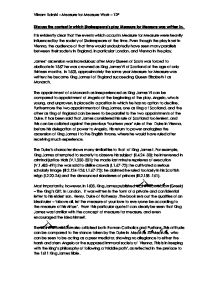 Discuss the context in which Shakespeare(TM)s play Measure for Measure was written in.

Discuss the context in which Shakespeare's play Measure for Measure was written in. It is evidently clear that the events which occur in Measure for Measure were heavily influenced by the society of Shakespeare at the time. Even though the play is set in Vienna, the audience of that time would undoubtedly have seen many parallels between their society in England, in particular London, and Vienna in the play. James' ascension was incredulous; after Mary Queen of Scots was forced to abdicate in 1567 he was crowned as King James VI of Scotland at the age of only thirteen months. In 1603, approximately the same year Measure for Measure was written; he became King James I of England succeeding Queen Elizabeth I as Monarch. The appointment of a Monarch as inexperienced as King James VI can be compared to appointment of Angelo at the beginning of the play. Angelo, who is young, and unproven, is placed in a position in which he has no option to decline. ...read more.

and the denounced slanderers of princes (III.2.158-161). Most importantly, however, in 1603, King James published Basilikon Doron (Greek) - The King's Gift, in London. It was written in the form of a private and confidential letter to his eldest son, Henry, Duke of Rothesay. The book sets out the qualities of an ideal ruler - 'above all, let the measure of your love to everyone be according to the measure of his virtue'. From this particular quote it can clearly be seen that King James was familiar with the concept of measure for measure, and even encouraged the idea himself. The Basilikon Doron also criticised both Roman Catholics and Puritans. This attitude can be compared to the stance taken by the Duke in Measure for Measure, who can be seen to be acting as a peer mediator, showing no allegiance to either the harsh and stern Angelo or the supposed immoral society of Vienna. ...read more.

ideals of the intransigent Angelo, for example when he refuses to shift his judgement of Claudio, and verse 44 being concurrent with the ideals of the Duke, for example when he pardons Barnadine, in Act V Scene 1. The basic plot which Shakespeare employed in Measure for Measure was not new to that play. Its ultimate source was a historical incident supposed to have occurred near Milan in 1547. A young wife prostituted herself to save her condemned husband. The magistrate who had forced the woman to yield to him proceeded to execute her husband. He was eventually made to marry the widow and was then put to death himself for his crime against her. Further inspiration for Shakespeare's play can be seen from the law passed in September 1603 which proclaimed the demolition of houses in the suburbs of London - where most brothels were located - in an attempt to stop the spread of the plague. ?? ?? ?? ?? Vikram Bakshi - Measure for Measure Work - 12P ...read more.