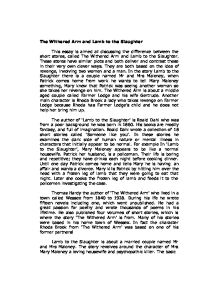 Discuss the difference between The Withered Arm and Lamb to the Slaughter.

The Withered Arm and Lamb to the Slaughter This essay is aimed at discussing the difference between the short stores, called The Withered Arm and Lamb to the Slaughter. These stores have similar plots and both deliver and contrast these in their very own clever ways. They are both based on the idea of revenge, involving two women and a man. In the story Lamb to the Slaughter there is a couple named Mr and Mrs Maloney, when Patrick comes home from work he wants to tell Mary Maloney something, Mary knew that Patrick was seeing another woman so she takes her revenge on him. The Withered Arm is about a middle aged couple called Farmer Lodge and his wife Gertrude. Another main character is Rhoda Brook a lady who takes revenge on Farmer Lodge because Rhoda has Farmer Lodge's child and he does not help her bring him up. The author of 'Lamb to the Slaughter' is Roald Dahl who was from a poor background he was born in 1860. His books are mostly fantasy, and full of imagination. Roald Dahl wrote a collection of 18 short stories called 'Someone like you'. In these stories he examines the dark side of human nature or mental illness in characters that initially appear to be normal. For example In 'Lamb to the Slaughter', Mary Maloney appears to be like a normal housewife. Patrick her husband, is a policeman. ...read more.

who took revenge. It started as Rhoda Brook being in love with Farmer Lodge who we presume was in love with Rhoda Brook too until one day when Rhoda found out that she was to have Farmer Lodge's child when he decided to desert her. When Farmer Lodge moved into the town with his new wide Gertrude Lodge, Rhoda was jealous as Gertrude had "hair of a lightish tint and her face s commonly as a live dolls." When Rhoda dreamt that she had cursed Gertrude she thought nothing of it, until the pair became really good friends and found a=out that this event did actually take place when Gertrude revealed her arm to Rhoda. The story continues with Gertrude's quest to heal her arm. She found out that Rhoda Brook had cursed her and allowed their relationship to deteriorate. It eventually turned out that her only chance of healing came from Rhoda Brook's son It is clear that the first woman of the relationship took revenge. In Lamb to the Slaughter, it was Mary whom took revenge she seems like the type who couldn't put up much of a fight. A fairly typical victim and then you look at the title 'Lamb to the Slaughter'. Mary Maloney seems to be the perfect choice of character for the victim of the story, but she turns out to be the murderer. So in-keeping with the theme of opposite characters, we ask ourselves, "Who would be the least likely to be the victim?" ...read more.

The Withered Arm is set in rural England. In Victorian times, she works on a farm. She is a milkmaid. These two stories come to a close in very different ways; one ends up with a boy dead and the other a man dead, but the boy in 'The Withered Arm' does not die due to revenge. But in 'Lamb to the Slaughter' the man dies due to revenge. In The Withered Arm the story ended with Rhoda Brook returning to her old job that she had at the start of the story which was milking of cows, Gertrude became too old and frail and died. Farmer Lodge became a kind, caring and thoughtful man! Gertrude died three days later in the town "Her blood had been turned indeed, too far. After this Rhoda had lost her friend and her son so she decided to resume to where she had started "her monotonous milking at the dairy was resumed" Farmer Lodge on the third corner of this triangular relationship gave up his farms and become a member of the parish after he overcame is remorse and moodiness. "...He eventually changed for the better, and appeared as a chastened and thoughtful man" To conclude this essay revenge takes place all the time and will continue to take place for years to come and it doesn't make any difference which century it happened in or if it is for good or bad. People will take revenge for things that happen to them, or their friends or family. ...read more.