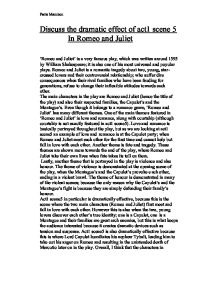 Discuss the dramatic effect of act1 scene 5 In Romeo and Juliet 'Romeo and Juliet' is a very famous play, which was written around 1595 by William Shakespeare; it is also one of his most universal and popular plays. Romeo and Juliet is a romantic tragedy about two, young, star-crossed lovers and their controversial relationship; who suffer dire consequences when their rival families who have been feuding for generations, refuse to change their inflexible attitudes towards each other. The main characters in the play are Romeo and Juliet (hence the title of the play) and also their respected families, the Capulet's and the Montague's. Even though it belongs to a romance genre, 'Romeo and Juliet' has many different themes. One of the main themes featured in 'Romeo and Juliet' is love and romance, along with courtship (although courtship is not exactly featured in act1 scene5). Love and romance is basically portrayed throughout the play, but as we are looking at act1 scene5 an example of love and romance is at the Capulet party; when Romeo and Juliet meet each other for the first time and cannot help but fall in love with each other. Another theme is fate and tragedy. These themes are shown more towards the end of the play, where Romeo and Juliet take their own lives when fate takes its toll on them. Lastly, another theme that is portrayed in the play is violence and also honour. The theme of violence is demonstrated at the opening scene of the play, when the Montague's and the Capulet's provoke each other, ending in a violent brawl. The theme of honour is demonstrated in many of the violent scenes; because the only reason why the Capulet's and the Montague's fight is because they are simply defending their family's honour. Act1 scene5 in particular is dramatically effective, because this is the scene where the two main characters (Romeo and Juliet) ...read more.

Honour is one of themes in 'Romeo and Juliet' and in Shakespeare's time, a person's pride and reputation were very fundamental; especially to those with a respected family, name such as Capulet. If a member of either family felt insulted or injured by the other, they might respond to this by seeking revenge. This could therefore develop into a difficult situation, where a strong sense of family honour could often resort to violent acts of revenge and family feuds. Angrily, Tybalt reports his discovery of Romeo gate-crashing the party, as he thinks that Romeo and his friends have come to make a mockery of the Capulet's: 'A villain that is hither come in spite, to scorn at our solemnity this night.' However, Lord Capulet has heard good things about Romeo and decides to leave him be as he does not want to cause a disturbance in front of the guests: 'I would not, for the wealth of all this town, here in my house do him disparagement.' But as Tybalt protests, Capulet begins to lose his temper with him for threatening to disturb the party: 'He shall be endured. What, Goodman boy? I say he shall! Go to! Am I the master here, or you? Go to! You'll make a mutiny among my guests!' Tybalt backs down from going to confront Romeo, because his uncle has embarrassed him in front of everyone and has made him look like a fool, but his scheming mind begins to plot revenge against Romeo. During the confrontation between Tybalt and Lord Capulet, Tybalt refers to Romeo as a 'villain'. In Shakespeare's time, this was an insult to a man's birth and his behaviour. It suggested that he was both low-born and of bad character, and if Tybalt was to say this in front of Romeo, it would surely be enough to provoke a duel; which is just what happens later on in the play. ...read more.

O dear account! My life is my foe's debt.' Romeo is devastated at the heavy price he is to pay, for loving someone so close to the heart of his great enemy. Juliet does not yet know who Romeo is but she does not want to ask the nurse outright, because then the nurse will know that she is interested in him, which she does not want. Instead, she finds a crafty way to do it by requesting to know the names of some of the other guests first, before asking to know the name of Romeo; making out she is just being curious. 'If he be married, my grave is likely to be my wedding bed.' Juliet feels that if Romeo is already married, it will be likely that she will die unmarried, because she is so madly in love with him that she would not be able to move on and seek another husband. But when the nurse tells Juliet who Romeo is, she is just as shocked as Romeo was: 'My only love sprung from my only hate!' Juliet realises that she has fallen in love with a Montague, the family she is supposed to hate. When Juliet says this it reminds me of the themes of the play, love versus hate. This is dramatically effective because love and hate is a very emotional subject so it will keep the audience interested. Also, the tension of Romeo and Juliet discovering each other's identity will help create the audience's expectations of what will happen next. Having looked at all these points, I can conclude that Shakespeare has made act1 scene5 dramatically effective; there is tension, excitement, and suspense, which help keep the audience interested and makes them want to find out what happens next. A modern audience would still appreciate this scene because love and romance is involved, so it gives it a universal appeal meaning that everybody will be interested. Paris Mannion ...read more.