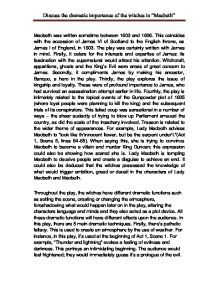 Discuss the dramatic importance of the witches in Macbeth

Macbeth was written sometime between 1603 and 1606. This coincides with the accession of James VI of Scotland to the English throne, as James I of England, in 1603. The play was certainly written with James in mind. Firstly, it caters for the interests and expertise of James: its fascination with the supernatural would attract his attention. Witchcraft, apparitions, ghosts and the King's Evil were areas of great concern to James. Secondly, it compliments James by making his ancestor, Banquo, a hero in the play. Thirdly, the play explores the issue of kingship and loyalty. These were of profound importance to James, who had survived an assassination attempt earlier in life. Fourthly, the play is intimately related to the topical events of the Gunpowder plot of 1605 (where loyal people were planning to kill the king) and the subsequent trials of its conspirators. This failed coup was sensational in a number of ways - the sheer audacity of trying to blow up Parliament amazed the country, as did the scale of the treachery involved. Treason is related to the wider theme of appearances. For example, Lady Macbeth advises Macbeth to "look like th'innocent flower, but be the serpent under't."(Act 1, Scene 5, lines 64-65). When saying this, she is trying to convince Macbeth to become a villain and murder King Duncan; this expression could also be showing how scared she is. Lady Macbeth is tempting Macbeth to deceive people and create a disguise to achieve an end. ...read more.

The audience's point of view on Macbeth also changes from strong and loyal to a treacherous and murderous character. The witches also foreshadow the torture that Macbeth will feel when they say "Hang upon his penthouse lid; He shall live a man forbid". These words rhyme; this makes it sound like an enchantment, like a chant. "I'll drain him dry as hay!" is a simile, which has been used to create a picture (of a man being tortured) of what's going to happen to Macbeth. When the audience hears this line with the word "drain" in it, they will be wondering whether the witches are going to drain him with blood. However it's only in the next line, "Sleep shall neither night nor day", that the audience understands that the witches are going to drain Macbeth with sleep like one of the witches did to the poor sailor because of his wife not giving chestnuts to the witch. "And munched, and munched, and munched" is a repetition of the woman eating. This emphasises the point and helps the audience to visualise the eating actions. Witches can't kill so they would do anything possible to play around with the victim's consciousness. In Act 1, Scene 3, after the sailor's meeting, all three sisters pronounce a chant. They also link back to evil when they say "thrice to thine" which again relates back to evil. The audience here will be warned about what's going to happen to Macbeth, Shakespeare uses foreshadow in this context. ...read more.

By 'illness' Lady Macbeth mean 'evil', but her metaphor is appropriate; Macbeth catches 'evil', as one might catch a disease. Duncan getting killed creates havoc; it upsets the natural order and the reminder to the audience that you have to accept the King or Queen chosen by God is very well interpreted so that the message is clear. If you unbalance the natural order, you'll allow 'evil' to take over. A paradox is used when Macbeth changes from a loyal Lord to a murderer. This is one of the important turning points. Macbeth gains the crown; but he loses love, friendship, respect - and in the end his life. His crime is rightly punished. It can be argued that the witches are not human at all, and therefore cannot be considered as a character. They are certainly a malign force in the play. They do not invite Macbeth to murder Duncan or even suggest such a thing. This shows that witches are very powerful. They symbolise evil, but man is free to resist them. Macbeth's downfall occurs partly because he comes to depend upon their information. The prophecies weren't prophecies; they were Macbeth's driving force. The audience will not be very pleased to see the witches as they are supernatural phenomena; they are the device that unbalances the natural order. The audience will also be partly surprised that Shakespeare has included Hecate, the leader of the witches as a real person. But as I said before it was all in Macbeth's hand, he was the one to choose his faith. ?? ?? ?? ?? Discuss the dramatic importance of the witches in "Macbeth" ...read more.