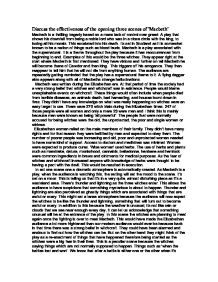 Discuss the effectiveness of the opening three scenes of Macbeth

Discuss the effectiveness of the opening three scenes of 'Macbeth' Macbeth is a thrilling tragedy based on a mans lack of control over greed. A play that shows his downfall from being a noble lord who was in a close circle with the king, to losing all his morals. This escalated into his death. Its set in Scotland as it is somewhat known to be a nation of things such as blood feuds. Macbeth is a play associated with the supernatural. It is a theme throughout the play because it has reoccurrences from beginning to end. Examples of this would be the three witches. They appear right at the start where Macbeth is first mentioned. They have visions and further on tell Macbeth he will become thane of Cawdor and then king. This triggers off his arrogance. They then reappear to tell him that he will not die from anything human. The audience are repeatedly getting reminded that the play has a supernatural theme to it. A flying dagger also appears along with all of Macbeths strange hallucinations. Macbeth was written during the Elizabethan era. At that period of time the society had a very strong belief that witches and witchcraft was in existence. People would blame unexplainable events on witchcraft. These things would often include when people died from terrible diseases, an animals death, bad harvesting, and houses burnt down in fires. ...read more.

In Act one Scene two there is a dramatic contrast to the opening scene. In the first scene there is a mysterious and quite a scary theme but in scene two it turns cheerful. The witches are gone and no elements of the supernatural are now presented. It seems like they have skipped a few scenes as it goes from the three witches riddle to then after the battle. There is no information about the battle except from this scene where they are only talking about its past events. The good king Duncan hears the news on how the battle went in this scene. He gets told how heroically Macbeth and Banquo have fought against Macdonwald and his band of rebels; and then against the Norwegians and the Scottish traitor. King Duncan, Sergeant and Ross now views Macbeth as a brave warrior. 'For brave Macbeth - well he deserves that name' is how the sergeant describes him to be. This shows the respect and appreciation they have for him. They now portray Macbeth to be a noble gentleman and an idol that should be looked up to. At this point in the play the audience will also think highly of Macbeth by his description without even laying eyes on him yet. Whilst the sergeant carries on talking about Macbeth he then says 'Which ne'er shook hands, nor bade farewell to him, till he unseam'd him from nave to the chaps'. ...read more.

In my opinion the first three scenes of Macbeth are very effective as an opening to the play. It has already showcased the main points of the play with not giving away too much information to make it predictable. It leaves the audience to ask questions to themselves to query what is going to happen next. The theme has been shown in the play by mixing the supernatural and the not. It is also showing how the play is all about power and the hierarchy that Macbeth is climbing up on. Then telling the audience that battles are something that's going to occur throughout this play by having the first three scenes based around one. The opening would have been more effective to an Elizabethan audience as opposed to a modern audience. The modern audience would find it a lot harder to understand the language that's being used as it has changed from when the play was written. The Elizabethan audience believed in the supernatural so it would have been more intense to watch. The play is based around things that might of happened around the Elizabethan era. They can relate the play more to their real lives. Whereas for a modern day audience, witches are not something that we talk about in our everyday lives so we cannot relate the play to our own experience. This might make the Elizabethan audience understand the play more. By Cat Malcolm ...read more.