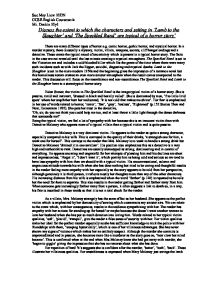 Discuss the extent to which the characters and setting in 'Lamb to the Slaughter' and 'The Speckled Band' are typical of a horror story' There are many different types of horror e.g. comic horror, gothic horror, and mystical horror. In a murder mystery, there is usually a mystery, victim, villain, weapons, secrets, cliff-hanger endings and a detective. These create the typical mood of uncertainty which is present in a typical horror story. The facts in the case are not revealed until the last minute creating a mystical atmosphere. The Speckled Band is set in the Victorian era and includes a cold-blooded killer which fits the genre of the time where there were many such incidents such as with Jack the Ripper, suicidal, disgusting and mystical deaths. Lamb to the Slaughter is set in the more modern 1950s and the beginning gives the impression of a romance novel but this homeliness aurora creates an even more sinister atmosphere when the result comes unexpected to the reader. This discussion will focus on the resemblance and non-resemblance The Speckled Band and Lamb to the Slaughter have to a stereotypical horror story. Helen Stoner, the victim in The Speckled Band is the image typical victim of a horror story. She is passive, timid and introvert, 'dressed in black and heavily veiled'. She is dominated by men, 'five little livid spots' where her stepfather hurt her and scared, 'It is not cold that makes me shiver'. Her fear is emphasized in her use of words related to horror, 'terror', 'fear', 'grey', 'restless', 'frightened' (p.152 Stories Then and Now, Heinemann 1993). She puts her trust in the detective, 'Oh, sir, do you not think you could help me too, and at least throw a little light through the dense darkness that surrounds me?' Being the typical victim, we feel a lot of sympathy with her because she is an innocent victim than with Detective Maloney who appears more of a typical villain than a typical victim and is quite passive. ...read more.

They are personally involved in the crime because not only do they know the murderer but they are good friends with her and this affects the ability of making of a fair judgement and collecting accurate evidence, especially as they believe everything she tells them and have no notion that there is even a remote possibility that she is connected to the murder on the simple basis that she is their friend. They are uncouth, ignorant and s****t in the way they refer to the murderer as 'he' instead of, for example, 'the murderer' when they have no proof at all who the murderer is. The end comment, 'probably right under our noses', Is ironic and sarcastic, portraying their stupidity and ignorance. However their intentions are good, for example when she is offered, by Noonan, to go with 'his own wife who would take care of her'. Holmes is caring as he uses reassuring words to Miss Stoner, 'soothingly, bending forward and patting her forearm'. Holmes also appears as a quick worker, described by his companion to be 'as swift as intuitions, and yet always founded on a logical basis'. His terms of address that he uses such as 'sir' and 'madam' are polite and formal. He is observant and confident, 'There is no mystery...left-hand side of the driver'. This introduces us to how clever and cunning Holmes is. He makes a judgement of the situation and obtains a result at the end. He has a logical approach and is an observes the evidence extremely accurately proved by the quote above. He is a typical horror story detective in this sense and because he is very paternal, he creates a comfortable and trusting atmosphere with his clients but remains authoritative and resolves all their problems so that there is always a closed ending. A stereotypical setting for a horror story is usually described as eerie, dark and usually set in an isolated, old mansion far from towns and cities. ...read more.

It does use words which are related to horror, such as, 'hit', 'club', 'crashed', 'violence', 'body', 'crash', which retains the murder mystery atmosphere despite how it appears at first. The end of Lamb to the Slaughter is very entertaining to the reader where there is a slight but clever twist where the detectives eat the crucial piece of evidence. The reader does not expect this ending at all and what appears to the reader at first does not support the rest of the sequence in the story at all. A lot of events may come as a shock to the reader although there are small hints to suggest what will happen, such as the title, Lamb to the Slaughter, suggests the murder will consist of a lamb, perhaps used as a weapon and acts as an instrument of the murder. So when Mary Maloney mentioned 'a leg of lamb', it was quite clearly suggested that the murder would soon take place. The Speckled Band is very intriguing in the way Dr. Roylett sets out his murder plans. The reader expects him to be caught and locked up for his crime at first but to be killed by his own weapon creates an even more satisfying feeling for the reader. The words used in this story are archaic as they are not used in everyday modern life. The sentences tend to be longer than in Lamb to the Slaughter and are broken up by semi-colons. The language is old-fashioned which reflects the time in which it was written as well. The language is also quite formal whereas in Lamb to the Slaughter, it is more informal, 'For God's sake..'. This reflects the also informal and comfortable atmosphere Lamb to the Slaughter sketches which creates an uncertainty, about what is going to happen, with the reader. The Speckled Band's formal language creates a more sinister atmosphere and the many clues, and also red herrings to fool the reader, intrigues the reader to follow Holmes' case and attempt to solve it by themselves as well. Sue May Liow 10DN GCSE English Coursework Mr. Deakin 10y1 ...read more.