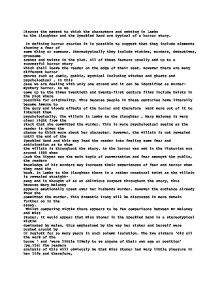 Discuss the extent to which the characters and setting in Lambs to the Slaughter and the Speckled Band are typical of a horror story.

Discuss the extent to which the characters and setting in Lambs to the Slaughter and the Speckled Band are typical of a horror story. In defining horror stories it is possible to suggest that they include elements showing a fear of some thing or someone. Stereotypically they include victims, murders, detectives, gruesome scenes and twists in the plot. All of these factors usually add up to a successful horror story which shall leave the reader on the edge of their seat. However there are many different horror genres such as comic, gothic, mystical including witches and ghosts and psychological . In this case we are dealing with only one strand and it can be identified as murder-mystery horror. As we come up to the times twentieth and twenty-first century films include twists in the plot where possible for originality. Thus because people in these centuries have literally become immune to the gory and b****y effects of the horror and therefore want more out of it to interest them psychologically. The villain in Lambs to the Slaughter , Mary Maloney is very clear right from the start that she committed the murder. This is more psychological seeing as the reader is given the chance to think more about her character. However, the villain is not revealed until the end of the Speckled Band and this may lead the reader into feeling some fear and anticipation as to whom the villain is throughout the story. ...read more.

all add up to give the reader the impression that she is the opposite of sinister and more of a loving housewife. The description of her being 'placid', 'soft' and 'tranquil' and when it says: 'Her skin......wonderful translucent quality....mouth was soft....eyes...darker ..'(pg.137) also suggest that she is more of a stereotypical victim rather than a villain. The use of the word 'love' described as her feelings for her husband may also suggest this point and that she is a very calm, family loving women. However, her submissive behaviour to her husband and obsessive time keeping of his whereabouts indicate that maybe her love for him is more than pure innocent. After all a wife who repeatedly everyday goes through a schedule of listening for her husbands 'car tyres', 'footsteps' and 'the key turning in the lock' maybe indicates that she has some suspicions about him and is always wanting to know where he is. This gives the reader the idea that she is very possessive. Another point to be made id the way she: 'loved to luxuriate in the presence of this man' (pg.138) and the way she was excessively possessive of her husband gives the reader the impression that if she can't have him then no one else can. This extreme possession in a way gives her a scary edge as its as if she willing to do 'anything' to not let him be with anyone else but herself. ...read more.

This homely, cosy house where the people inside even know the grocer's by name seems far from the murder setting that it is, especially since it is situated in a domestic community. This romantic setting , however, may increase the excitement and surprise in the readers mind when they discover that Mary Maloney is a murderer, thus because the story will be made less predictable. In conclusion after doing careful comparisons and looking at individual quotations it is obvious that the Speckled Band is more stereotypical than Lambs to the Slaughter. After all the characters all fit the descriptions of stereotypical people in murder mysteries. The detective is intelligent and highly observant, the victim is an over dramatic, desperate, fearful female and the villain is a clever, ruthless money seeking man. The structures of both stories are able to engage the reader but in different ways. More stereotypically in the Speckled Band the reader is engaged by the mystery and is interested in finding out all the clues and answers to the murder mystery, however, in Lambs to the Slaughter the reader is interested in finding more about Mary's character and whether or not she gets away with it. Whereas the Speckled Band is more of a conventional murder mystery Lambs to the Slaughter has more originality to it seeing a s the loving house wife is the murderer. Overall the Speckled Band is the usual murder mystery and Lambs to the Slaughter is a more emotional, original, exciting and different kind of murder story. ...read more.