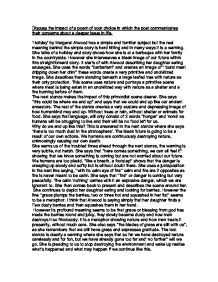 Discuss the impact of a poem of your choice in which the poet communicates their concerns about a deeper issue in life::'Holiday' by Margaret Atwood

Discuss the impact of a poem of your choice in which the poet communicates their concerns about a deeper issue in life. 'Holiday' by Margaret Atwood has a simple and familiar subject but the real meaning behind the simple story is hard hitting and in many ways it is a warning. She talks of a holiday and story shows how she is at a barbeque with her family in the countryside. However she interweaves a bleak image of our future within this straightforward story. It starts of with Atwood describing her daughter eating sausages. She uses the words ''barbarism'' and creates an image of '' burst meat dripping down her chin'' these words create a very primitive and uncivilized image. She describes them standing beneath a large leafed tree with nature as their only protection. This scene uses nature and portrays a primitive scene where meat is being eaten in an uncivilized way with nature as a shelter and a fire burning before of them. ...read more.

We humans are too placid. ''like a breath, a footstep'' shows that the danger is creeping up slowly and softly but is without doubt there. She uses a juxtaposition in the next line saying, ''with its calm eye of fire'' calm and fire are 2 opposites as fire is never meant to be calm. She says that ''fire'' or danger is coming but very peacefully. The calm 'nothing' carries with it an explosive danger, which we are ignorant to. She then comes back to present and describes the scene around her. She continues to depict her daughter eating and looking for berries. However the line ''grace plumps the berries, two or three hot and squashed in her fist'' seems to be a metaphor. I think that Atwood is saying simply that her daughter finds a Few dusty berries and then squashes them in her hand. However its profound meaning seems to be that grace or blessing from god has made the berries round and juicy, they slowly became dusty and now man destroys it so frivolously. ...read more.

There have been so many stories like this poem telling us how our future might not be what we expect it to be yet, no one has responded to them and we continue to kill animals, waste resources as if we own them and drastically cut down large amounts of trees. It is already been said that in a years time there will be no oil left for us as we would have used it all up. Global warming is solely our fault. The increased use of CFC's in air conditioners, refrigerators, deodorants and other electrical appliances has increased the earth's temperature greatly and caused many holes in the ozone layer. Animals are killed in plentiful and now we have large amounts of endangered species. Soon as she says there will be no animals left for us to feed on, no trees or water. With so many factors against us there is no chance of survival for humankind on this planet. Margaret Atwood conveys her story very subtly warning us of what we may become and urges us to stop what we are doing and sit up and take notice of how it will affect us in the long term. ...read more.

A very well written essay which uses varied syntax and complex vocabulary.
Some perceptive comments are made and quotes are selected carefully and analysed accurately using the correct linguistic and literary terminology.
Some well researched examples of the way humans are wasting the earth's resources back up the message in the poem.
A very good essay.
*****5 stars.