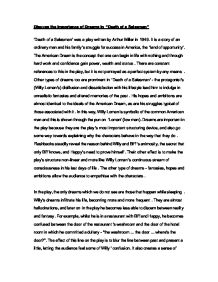 Discuss the Importance of Dreams in &quot;Death of a Salesman&quot;

Discuss the Importance of Dreams in "Death of a Salesman" 'Death of a Salesman' was a play written by Arthur Miller in 1949. It is a story of an ordinary man and his family's struggle for success in America, the 'land of opportunity'. The American Dream is the concept that one can begin in life with nothing and through hard work and confidence gain power, wealth and status. There are constant references to this in the play, but it is not portrayed as a perfect system by any means. Other types of dreams too are prominent in 'Death of a Salesman' - the protagonist's (w***y Loman's) disillusion and dissatisfaction with his lifestyle lead him to indulge in unrealistic fantasies and altered memories of the past. His hopes and ambitions are almost identical to the ideals of the American Dream, as are his struggles typical of those associated with it. In this way, w***y Loman is symbolic of the common American man and this is shown through the pun on 'Loman' (low man). Dreams are important in the play because they are the play's most important structuring device, and also go some way towards explaining why the characters behave in the way that they do. Flashbacks steadily reveal the reason behind w***y and Biff's animosity, the secret that only Biff knows, and Happy's need to prove himself. Their other effect is to make the play's structure non-linear and more like w***y Loman's continuous stream of consciousness in his last days of life. The other type of dreams - fantasies, hopes and ambitions allow the audience to empathise with the characters. In the play, the only dreams which we do not see are those that happen while sleeping. w***y's dreams infiltrate his life, becoming more and more frequent. They are almost hallucinations, and later on in the play he becomes less able to discern between reality and fantasy. ...read more.

I just finished paying for the car and it's on its last legs! The refrigerator consumes belts like a goddam maniac. They time those things. They time them so when you finally pay for them, they're used up." w***y here expresses his dissatisfaction with capitalist culture - connected with the American Dream - and how products are designed (in his view) to bleed as much money from the consumer as possible. The complaint has an air of unfamiliarity with the culture - w***y is idealistic and has a running fantasy that people are far less ruthless than they really are, and that they should make an exception for him due to his 'popularity' and his well-connected father. In a way, Happy and Biff personify the two different sides of the American Dream. Happy's ambition is to be a successful salesman like his father believes he was himself, although even he is not content with this way of life - "Sometimes I sit in my apartment all alone. And I think of the rent I'm paying. And it's crazy. But then, it's what I always wanted. My own apartment, a car, and plenty of women. And still, goddammit, I'm lonely". On the other hand, Biff personifies the pioneering spirit of 'the great outdoors' and a rural, simple life. His family's home in the city and his father's hopes for Biff prevent him from following this dream to an extent, although it is hinted at in some parts of the play that w***y himself would've been better off following this kind of life - he says to Linda, "You wait, kid, before it's all over we're gonna get a little place out in the country, and I'll raise some vegetables, a couple of chickens". Unfortunately, neither Happy nor Biff is successful, proving that neither of their ideals are realistic. Yet another facet of the American Dream is the need to leave behind a legacy and not be forgotten when one dies. ...read more.

In conclusion, dreams are important in "Death of a Salesman" because they explain the past, present and allow the audience to predict events in the future. Characters can be seen portrayed as their full selves - their whole lives, almost - rather than a stranger. The dreams also change the entire structure of the play, merging the past, present and future so that it resembles a mental state rather than a narrative chain of events. The dreams I have discussed here include flashbacks, hopes and ambitions, and cultural dreams, i.e. the American Dream. I don't think Miller was criticising the American system of capitalism in itself, so much as the pressure placed on individuals to be a 'success' when they can be just as happy living a simple life with not as much wealth. He highlighted the tragedy which can be brought about from this pressure, and I believe some of his own views may be mediated through Biff, who says close to the end, "Why am I trying to become what I don't want to be? What am I doing in an office, making a contemptuous, begging fool of myself when all I want is out there, waiting for me the minute I say I know who I am! Why can't I say that, w***y?". Miller knows everyone is affected by their past, their hopes and ambitions and those around them's dreams. His play is an obvious example of how dreams affect individuals and spill over into others' lives. w***y is arguably his, if rather unvirtuous, tragic hero. He is not a 'great man' in the sense of Shakespeare's plays, but he is trying to support his family and follow the dreams forced upon him by his society, and fails miserably. He is the modern equivalent of the Shakespearian heroes, as his salesman position makes him a symbol of consumerism, but he is still human. Death of a Salesman is a warning of false dreams which dictate one's life, and a statement about natural human crises - failure, disappointment, breaking apart of relationships, and death. ...read more.