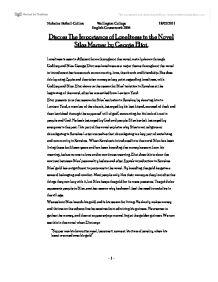 Discuss The Importance of Loneliness in the Novel Silas Marner by George Eliot. Loneliness is seen in different forms throughout the novel, mainly shown through Godfrey and Silas. George Eliot uses loneliness as a major theme throughout the novel to introduce other issues such as community, love, the church and friendship. She does this by using Eppie and the stolen money as key point regarding loneliness, with Godfrey and Silas. Eliot shows us the reason for Silas' isolation in Raveloe at the beginning of the novel, after he was exiled from Lantern Yard. Eliot presents to us the reasons for Silas' seclusion in Raveloe, by showing him in Lantern Yard, a member of the church, betrayed by his best friend, accused of theft and then banished through the supposed 'will of god', accounting for his lack of trust in people and God. He feels betrayed by God and people. Silas has felt betrayed by everyone in the past. This part of the novel explains why Silas is not religious or churchgoing in Raveloe. Later we realise that churchgoing is a key part of socialising and community in Raveloe. When Raveloe is introduced into the novel Silas has been living there for fifteen years and has been hoarding the money he earnt from his weaving, he has no one to love and so continues weaving. ...read more.

The rector at the party shows us Godfrey's anxiousness towards Nancy when he says: "When anybody pretends this has been a severe winter, I shall tell them I saw the roses blooming on New Year's Eve -- eh, Godfrey, what do you say?" Eliot then shows us that: 'Godfrey made no reply, and avoided looking at Nancy very markedly.' This shows how Godfrey has a strong will, as he is not giving in to his temptations, but waits for his marriage to end, trying to be as polite as he can. The paths of the Cass family and Silas meet in chapter 4, when Dunstan steals Silas' money. This part of the novel is the beginning turning point of Silas' metamorphosis from a lonely miser to a part of Raveloe. Eliot is trying to develop our understanding of the meaning of the gold to Silas, so that when it is stolen, the contrast is all the greater. Eliot uses chapter 5, to show us how Silas returns home looks over his gold before eating dinner. By doing this, Eliot shows us how Silas' life and daily routine revolve around his gold, and when it is stolen his reaction is magnified-his only joy and purpose in life has been taken away. Eliot also uses this chapter to show us the foundation of Silas' transition from a miser. ...read more.

This contrasts Godfrey's feelings at the time. He becomes even lonelier through knowing that Eppie brings happiness to Silas, who in Godfrey's mind doesn't deserve her, even though he raised her. Eliot uses the effect of Eppie's absence in the Cass family, to show us Nancy's feelings towards welcoming his child. She is portrayed as being 'kept in the dark', not having known about Eppie, therefore not being able to make any decisions about her. This brought about more loneliness for Nancy, who tries to make Godfrey feel better and Godfrey who is tormented by not having Eppie in his family. He feels that his duty is to now acknowledge her, trying to reclaim her from Silas, who has cared for her since she was two years old. All of the points raised by Eliot are used to express the different forms of loneliness that can be seen through Silas and Godfrey. The gold and Eppie are used as 'instruments' through which loneliness can be brought about. The gold keeps Silas isolated until Eppie arrives and subsequently Godfrey becomes lonely as he can see the joy she brings to Silas, and the child he has missed out on. This is why the issue of loneliness in Eliot's novel can be complicated or in-depth at times, and obvious in others, accentuating the overall importance of loneliness in the novel. ?? ?? ?? ?? Nicholas Bethell-Collins Wellington College 18/02/2011 English Coursework 2006 - 1 - ...read more.